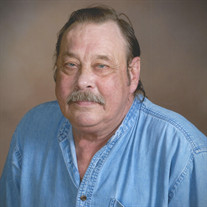 Edwin Dennis McKendrick, son of the late Edwin David and Ruth (Chapman) McKendrick, was born February 7, 1951 in Ft. Hood, Texas. Due to his father being in the military, Edwin and the family was transferred to Japan shortly after his birth. While in Japan he learned to speak Japanese and when his dad was transferred to Fort Crowder, Edwin only knew how to speak Japanese so his father had to go with him to kindergarten. The family was transferred to Fort Leonard Wood in 1958 and as he would say “the rest is history”. Edwin graduated from Waynesville High School in 1970 and then began working for Rand’s True Value. After leaving Rand’s he worked for Meeks Building Supply for several years and in April of 2016 had to quit because of his health. On February 11, 2000, Edwin was united in marriage to Linda Mary Smith. They shared over 17 years of marriage together and many wonderful memories. In his spare time, Edwin enjoyed being outdoors; whether it was fishing, stock car racing, or boat racing. He had quite the collection of old cameras and 8-track music recordings (which he still listened to). His man cave was his “little piece of heaven” where he could unwind after a long day at work. Most importantly, he loved spending time with his family and friends, especially his grandchildren: Kali and Braylon. Edwin passed away Thursday, May 18, 2017 in his home having attained the age of 66 years. He will be sadly missed, but fondly remembered by all those that knew and loved him. Edwin leaves to cherish his memory, his loving wife Linda of the home; two children: Scott McKendrick of Rolla, Mo and Lindsay McKendrick of Norfolk, VA; one sister: Sue Melton of Rolla; two grandchildren: Kali and Braylon; other relatives and friends. In addition to his parents, Edwin was preceded in death by one brother, John McKendrick. Services were held at 7:00 p.m. Tuesday, May 23, 2017 in the Memorial Chapels and Crematory of Waynesville / St. Robert with Pastor Christopher Hendrix officiating. The songs “Something to Remind You”, “The Dance” by Garth Brooks, “Amazing Love” and “I Don’t Deserve a Mansion” both by Charlie Pride, “Candle in the Wind” by Elton John, “In the Garden” by Billy Dean and Susan Ashton and “Butterfly Kisses” by Bob Carlisle were played. Inurnment was held in the Resurrection Cemetery of St. Robert, Missouri. Memorial contributions may be made in memory of Edwin McKendrick and may be left at the funeral home.

Edwin Dennis McKendrick, son of the late Edwin David and Ruth (Chapman) McKendrick, was born February 7, 1951 in Ft. Hood, Texas. Due to his father being in the military, Edwin and the family was transferred to Japan shortly after his... View Obituary & Service Information

The family of Edwin Dennis McKendrick created this Life Tributes page to make it easy to share your memories.