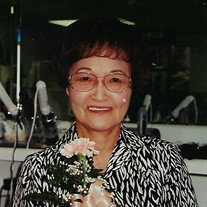 Eiko “Kitty” Scott, daughter of Kuranosuke Hanzawa and Kikui Kida, was born October 29, 1928 in Toyame Ken, Japan where she grew up and attended school. Kitty attended Kunitachi Music College in Tokyo where she majored in piano performance and minored in voice. Kitty met a young American soldier by the name of William Howard Scott. They were united in marriage on May 26, 1953 in Tokyo. They shared several wonderful years together before he preceded her in death. After moving to the States, Kitty became a self-employed music teacher. She taught piano and voice for over 60 years. She loved music and it was very contagious to her students. They grew to love the music as much as she did. Kitty also enjoyed going to symphonies and listening to opera. In her spare time, Kitty loved flowers, bird watching and was very talented when it came to crocheting and embroidery work. She enjoyed making different items for her family and friends. Kitty was known for her fried rice and everyone loved eating it. Kitty was a member of the Faith Evangelical Lutheran Church of St. Robert for many years and was a member of the Lutheran Women’s Missionary League. She was also a member of the Protestant Women of the Chapel located on Fort Leonard Wood and the Rolla Area Music Teachers’ Association. After the passing of her husband, Kitty enjoyed many years going to different functions and serving the Lord with her dear friend, Rev. Wilbur Harbaugh. Kitty went home to be with her Lord Tuesday, July 23, 2019 in the Silverstone Place of Rolla, Missouri having attained the age of 90 years, 8 months and 25 days. Kitty leaves to cherish her memory, one step-daughter: Carolyn Janes of Salem, OR; two brothers: Shigenobu Hanzawa and Takamaro Hanzawa, both of Tokyo, Japan; her grandchildren and great grandchildren; other relatives and special friends. In addition to her parents and husband, Kitty was preceded in death by one stepdaughter: Dorothy Ann Applegarth; and special friend: Rev. Wilbur Harbaugh. Funeral services were held at 10:00 a.m. Tuesday, July 30, 2019 in the Faith Evangelical Lutheran Church of St. Robert, Missouri with Pastor John Perling officiating. Music was provided by pianist Heidi Perling and soloist Michelle Jones. Serving as escorts were Tom Dunn, Mike Jones, Dennis Engstrom, Frank Brunais, Hans Rinas, Ron Hinchman, Justin Munson, Jared Munson, Dave Harbaugh and Dan Boorom. Burial followed in the Main Post Cemetery of Fort Leonard Wood, Missouri. Services were under the direction of Memorial Chapels and Crematory of Waynesville / St. Robert. Memorial contributions may be made in memory of Kitty Scott to the Faith Evangelical Lutheran Church Organ Fund and may be left at the funeral home.

Eiko &#8220;Kitty&#8221; Scott, daughter of Kuranosuke Hanzawa and Kikui Kida, was born October 29, 1928 in Toyame Ken, Japan where she grew up and attended school. Kitty attended Kunitachi Music College in Tokyo where she majored in piano... View Obituary & Service Information

The family of Eiko "Kitty" Scott created this Life Tributes page to make it easy to share your memories.