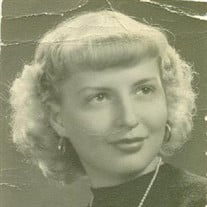 Elenor Helen “Ellie” Small, age 83, formally of Tucson, Arizona passed away in St. Robert, Missouri after a courageous battle with breast cancer. Elenor was born to George C. Woodin and Doris I. (Cowan) Woodin in St. Louis, Missouri on February 17, 1932. She was preceded in death by her parents George (Bud) and Doris Woodin, her husband Dr. J. Milton Small, her stepfather Arthur Lankford, her brother and sister-in-law Thomas and wife Ruth Woodin. Elenor is survived by her son Michael and his wife Reneé Bench and their son Bracken, a sister Cynthia Woodin and a brother Daniel Woodin, four nieces: Crystal Keeton, Robin Betzel, Karla Horton, and Laura Castle, two nephews: Thomas Woodin and Spencer Woodin, and two step-daughters: Sharon Graham and Lynnette Thomas. Elenor grew up on her family’s farm along the banks of the Big Piney River located near Devil’s Elbow, Missouri, as the Great Depression forced them to leave St. Louis. She graduated from Waynesville High School at the age of 16 with the class of 1949. She was chosen as Volleyball Queen and Carnival Queen during her high school years. Shortly after graduation she began working at the Bell Hotel in Waynesville. Later she worked at Ensco’s Jewelry Store, but was soon hired by Walt Burchard to work at Waynesville Security Bank where she worked for over 20 years. In 1950 she married Larry Bench and to this union one son (Michael) was born. In 1975 leaving the bright lights of Waynesville in her rearview mirror she headed to Montana. She first lived in Great Falls, and later Kalispell. In 1979 in Las Vegas, Nevada she married her late husband, Dr. J. Milton Small. Elenor and Milton enjoyed 35 happy years together living in Great Falls and Kalispell, Montana. After their retirement they had a winter home in Tucson, Arizona. They enjoyed many wonderful trips traveling to South America, Australia, and Europe. They spent several years traveling in their RV to all of the centennial U.S. and even to Alaska where they spent several summers. Elenor had many interests from gardening to her love of horses and as a young woman was an accomplished equestrian. She was a skilled interior designer which was evident in the many homes she decorated. She loved nature and enjoyed watching and feeding birds. At her home in Tucson she loved feeding the small quail that would come to her backyard. While being gone for months at a time they always knew when she and Milton returned home for the winter. A private graveside service will be held at a later date. Arrangements are under the direction of Memorial Chapels and Crematory of Waynesville / St. Robert. Memorials are suggested to the Waynesville/St. Robert Senior Center or the Shriners Children’s Hospital. Envelopes are available at Memorial Chapels and Crematory of Waynesville. She will be missed, but never forgotten.

The family of Elenor Helen "Ellie" Small created this Life Tributes page to make it easy to share your memories.