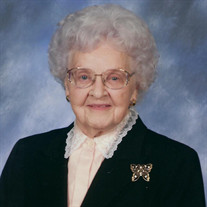 Elizabeth Janet Cartwright was born March 30, 1925, in Renovo, Pennsylvania. She was the first daughter of Charles and Anna Lovett. Betty, as she was known by her family and friends, attended all twelve years of school at St. Joseph Catholic School and graduated in 1943. When she graduated, World War II was going on and Betty began working in the railroad stockyards. She took inventory of all the pieces on the car trays that were being shipped overseas. While a teenager, Betty happened to see a young man by the name of Robert Leroy Cartwright at the railroad stockyards. Much to her dismay, he stated boldly that he was going to marry her. But after he returned from the Army in February of 1946, they started dating and were married on June 25, 1946, at the church parsonage by Father Miller. Betty and Robert were blessed with three children: Robert, Jr., Charlotte, and Alice. Due to Robert joining the Army, he was stationed at North Carolina for one year before being transferred to France where he and Betty stayed for 3 ½ years. After their time in France, they were transferred to Ft. Leonard Wood, Missouri for a short period of time before being transferred to Ft. Sheridan, Illinois. While stationed at Ft. Sheridan, Robert was sent to serve in Vietnam for one year and Betty and the children moved back home to Pennsylvania while he was deployed. After Robert returned, they were sent back to Ft. Leonard Wood for a short time before he was transferred again. This time all the children were grown, and Robert and Betty were sent to Germany. After spending time there, they were transferred back to Fort Leonard Wood where Robert retired, and he and Betty decided to stay in the area. Betty worked for the Post Exchange while they were stationed at Ft. Sheridan and after moving to the Ft. Leonard Wood area, she worked for the Daily Guide newspaper. In her spare time, she enjoyed reading mysteries and watching mystery shows such as Matlock and Perry Mason and her favorite show was the Golden Girls. She enjoyed working in her flower garden and on word seek puzzles. She loved baking and trying new recipes. She was especially known for her spaghetti sauce. She would say “You have to cook it slow for at least 3 hours and let the spices simmer.” So needless to say, she always had some in the freezer because spaghetti was her favorite food. After 50 ½ years of marriage, Robert passed away due to complications with diabetes in February 1997. Betty missed him terribly, but due to her faith, she was able to continue on. Betty has been a member of St. Robert Bellarmine Catholic Church in St. Robert, Missouri since 1947. She was a member of the Association of Catholic Women, the Prayer Line, and the Altar and Rosary Society. She loved volunteering at the church and when her health would allow her to do so, she would fix food for the shut-ins. Betty passed away Sunday, November 14, 2021, in her home having attained the age of 96 years. She will be sadly missed, but fondly remembered by all those that knew and loved her. Betty leaves to cherish her memory, her three children: Robert Cartwright, Jr. (Lynn) of St. Louis, MO, Charlotte Voudrie (David) of Waynesville, MO, and Alice Gossett (Jeffrey) of Waynesville, MO; nine grandchildren: James Smith (Lori) of Holts Summit, MO, John Smith (Carmen) of Germany, Franklin Smith (Marilyn) of Lebanon, MO, David Kershaw (Elizabeth) of Waynesville, MO, Michael Kershaw of Dixon, MO, Brittany Kershaw (Ethan Lite) of Dixon, MO, Angie Beste (Eric) of St. Louis, MO, Brian Cartwright (Chris) of St. Louis, MO, and Lisa Driscoll (Mike) of St. Louis, MO; thirty-six great grandchildren; seven great-great grandchildren; one sister: Mary Ann Stine of Williamsport, PA; several nieces, nephews, other relatives, and friends. Betty’s motto was to “Be Happy”. She said, “You have to keep yourself happy, if you want to make other people happy”. Her advice was to “Be good to yourself and know the difference between right and wrong.” Betty loved her family dearly and her preserving spirit will live on in their hearts forever.

Elizabeth Janet Cartwright was born March 30, 1925, in Renovo, Pennsylvania. She was the first daughter of Charles and Anna Lovett. Betty, as she was known by her family and friends, attended all twelve years of school at St. Joseph Catholic... View Obituary & Service Information

The family of Elizabeth Janet Cartwright created this Life Tributes page to make it easy to share your memories.