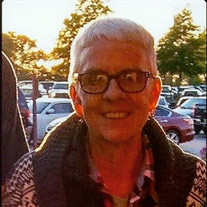 Elizabeth Ann “Susie” Jarvis, daughter of the late Thomas Fred Hampton, Sr. and Geraldine Agnes (Nutt) Hampton, was born August 18, 1954 in Richwood, West Virginia where she grew up and graduated from high school with the Class of 1972. Susie met a young man while in high school by the name of James Lee Jarvis. They were high school sweethearts and were united in marriage on March 3, 1973 after James came back from Vietnam. They shared over 45 years of marriage together and were blessed with two children, Candy and J.T. Due to James being in the military, Susie and the family was transferred to Fort Leonard Wood, Missouri and in 1989 they bought their home in Waynesville. Susie took great pride in helping provide for her family and worked at DPW on Fort Leonard Wood as a clerk and then later transferred to work as a clerk for the 58th Transportation AMC. In her spare time, Susie enjoyed being outdoors while camping, floating on the river and cutting wood. She was a member of the Order of Eastern Star in Richland, Missouri. Most importantly, she loved spending time with her family. Susie passed away Thursday, March 29, 2018 in General Leonard Wood Army Community Hospital of Fort Leonard Wood, Missouri having attained the age of 63 years. Susie leaves to cherish her memory, her husband: James L. Jarvis of Waynesville, MO; two children: Candy K. Jarvis of Waynesville, MO. and James “J.T” Jarvis of Arnold, MO; one brother: Fred Hampton of Durango, CO; one sister: Trixie Bailey of Beckley WV; four grandchildren: Agnes, Stanley, Makenna and Cameron; four great-grandchildren: Meeyah, Maycee, Nico and Alyce; aunts, uncles, cousins, niece, nephews and many wonderful friends. She had many friends and was the most wonderful Mom a person could have. She will be greatly missed. Graveside services were held at 2:00 p.m. Monday, April 2, 2018 in the Missouri Veterans Cemetery of Waynesville, Missouri with Pastor Chris Hendrix officiating. Arrangements were under the direction of Memorial Chapels and Crematory of Waynesville / St. Robert.

Elizabeth Ann &#8220;Susie&#8221; Jarvis, daughter of the late Thomas Fred Hampton, Sr. and Geraldine Agnes (Nutt) Hampton, was born August 18, 1954 in Richwood, West Virginia where she grew up and graduated from high school with the Class of... View Obituary & Service Information

The family of Elizabeth Ann "Suzie" (Hampton) Jarvis created this Life Tributes page to make it easy to share your memories.