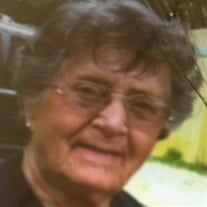 Elva Lea Henson, daughter of Glen and Ada (Green) Stewart, was born February 16, 1931 in Waynesville, Missouri where she grew up and graduated from high school. Elva was united in marriage to Wayne Henson and they shared many years together before he preceded her in death on August 11, 2012. For many years, Elva lived in California and Arizona where she served as a Field Inspector for the Department of Agriculture, raised bees for honey for Sue Bee Honey Company and also worked as a dog groomer for the stars in California. In the late 1960s, Elva moved back to Missouri and purchased and operated the Wayside Inn in Hazelgreen for over 30 years. In her spare time, Elva enjoyed being outdoors; whether it was fishing, going on float trips or looking for rocks for her rock collection. She lived life to the fullest and enjoyed every minute of it. She loved animals and would take in every stray and all kinds of animals to care for them. Elva passed away Sunday, February 17, 2019, in the Life Care Center, in Waynesville, Missouri having attained the age of 88 years. She will be sadly missed, by all those who knew and loved her. She is survived by a step-son, Kevin Henson of Richland, MO; a step-daughter, Brenda Kinchen of Waynesville, MO; a daughter, Lisa Odle of Columbia, MO; a son, Ronnie Dazin of the State of Arizona; a number of grandchildren and great-grandchildren; her brother, Donald Stewart (Shirley) of Castleton, IL; her sister, Ella Mae Crossland of Richland, MO; special friends and caretakers, Sheri Nickels (Shawn) of Waynesville, MO; three special cousins, Floyd Green (Janet) of Pekin, IL, Richard Green of Richland, MO, and Bernice Jones of Washington, IL; a number of nieces and nephews; as well as a host of other relatives and friends. In addition to her parents and husband, Elva was preceded in death by one sister: Gladys Reardon; and one brother-in-law: Kimmel Crossland. Memorial services will be held at 4:00 p.m. Saturday, June 22, 2019 in the Wayside Inn of Hazelgreen, MO. Arrangements are under the direction of Memorial Chapels and Crematory of Waynesville / St. Robert.

Elva Lea Henson, daughter of Glen and Ada (Green) Stewart, was born February 16, 1931 in Waynesville, Missouri where she grew up and graduated from high school. Elva was united in marriage to Wayne Henson and they shared many years together... View Obituary & Service Information

The family of Elva Lea Henson created this Life Tributes page to make it easy to share your memories.