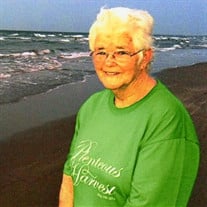 Elva Louise Smith, daughter of the late Virgil Rolla and Lena Vera (Boone) Limb, was born April 27, 1930, in Snomac, Oklahoma. She grew up attending school in Seminole, until age thirteen; her family then moved to Tulsa where she completed her education, graduating from Daniel Webster High School in 1948. Elva made a profession of faith as a young girl, following in baptism and was committed to serving the Lord. Elva, the shy girl that she was, soon would be swept off her feet by a handsome Navy man, John Willard Smith and the two were married on June 20, 1948 in the Red Fork Baptist Church in Tulsa, Oklahoma. Blessings from Heaven followed with the births of their four children, Vera Louise, Elva Jean “E.J.”, John Willard and Vernon Rolla. Elva lovingly cared for her home and family as they were her pride and joy. She and John extended their love by becoming Foster parents. Due to John being employed with Mid Continent Oil Company, the family moved to numerous places such as, New Mexico, Texas, Kansas, Monrovia, Liberia, West Africa settling there for five years. While in Liberia; John and Elva along with all four children, continued serving their Lord as missionaries. Elva worked outside the home for several companies such as, Phillips Petroleum Company, American Corporative School as their secretary, Wallace and Eddins-Walcher Oil Companies, Wal-Mart, Lexington Apartments and Motor Inn as Assistant Manager, and at the Ennis Care Center in Texas. After John’s retirement in 1991 the family moved back to Oklahoma until 2002; John and Elva then decided to move into the small community of Richland, Missouri and began attending Grace Baptist Church, where they were greatly loved and received by all. Elva having a servant’s heart continued serving her Lord and His church. Elva was not one to sit still, always keeping busy. She enjoyed cooking for her family and baking her famous homemade rolls that put smiles on anyone’s face who received them; she also enjoyed reading, studying her Bible, playing the piano, working on puzzles and outside in her yard. However, Elva’s most treasured times were spent with her family, and friends. On the morning of Saturday, December 10, 2016, surrounded by her loving family, Elva took the hand of her loving Lord she so faithfully served, went home for Christmas to be greeted by her beloved husband, John having attained the age of 86 years, 7 months and 13 days. Elva leaves to cherish her memory, four children: Vera Smith of Richland, MO, “EJ” Beauchamp (Jim Cassidy) of Redding, CA, John Smith (Wendie) of Richland, MO, Vernon Smith (Donna) of Boerne, TX; 7 grandchildren: Jennifer Nielson (Chad), Michaela Beauchamp, Johnny Smith (Maykala), Mary Smith, Vernon Smith Cody Davis (Amber), Kacy Norgan (Chad); 5 great grandchildren: Noah and Christian Nielson, Zephaniah Engelehaupt and Miyah Courtroul and Chase Norgan, several nieces, nephews, other relatives and friends. Elva was preceded in death by her parents, her husband John, one brother Gene Limb and his wife Marilyn. Though Elva has left our sight for just a little while, she will live on in our hearts forever, as we treasure the memories that were made. A Celebration of Life service was held at 11:00 a.m. Thursday, December 15, 2016 in the Grace Baptist Church of Richland, Missouri with Pastor’s Fred Bobe and Pastor Rocky Harris officiating. The recorded song, “She still remembers Jesus’ Name” was played. Paul Boone led the congregation in singing, “How Great Thou Art” and “Victory in Jesus.” Paul then sang, “In Christ Alone.” Soloist, Mary Ann Tate sang “What A Day That Will Be.” Inurnment was in the Missouri Veterans Cemetery, Springfield, Missouri. Services were under the direction of Memorial Chapel of Richland. Memorial contributions may be made in Elva Smith’s memory to Grace Baptist Church for the LEBAP-Living Epistle Baptist Church Philippines Missions and may be left at either the church at Memorial Chapel of Richland Funeral Home. II Corinthians 4:16-18 Therefore we do not lose heart, but though our outer man is decaying, yet our inner man is being renewed day by day. For momentary, light affliction is producing for us an eternal weight of glory far beyond all comparison, why we look not at the things that are seen, but at the things which are not seen; for the things which are seen are temporary, but the things that are not seen are eternal. Online condolences can be sent at www.memorialchapelsandcrematory.com.

Elva Louise Smith, daughter of the late Virgil Rolla and Lena Vera (Boone) Limb, was born April 27, 1930, in Snomac, Oklahoma. She grew up attending school in Seminole, until age thirteen; her family then moved to Tulsa where she completed her... View Obituary & Service Information

The family of Elva Louise (Limb) Smith created this Life Tributes page to make it easy to share your memories.