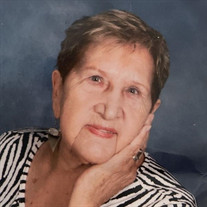 Emma Oertel Mann, age 84, passed away peacefully in her sleep with her daughter Sylvia by her side at her home, on Monday March 31. Emma was born April 19, 1937 to the late Johann Weirauch and Anna (Schepp) Weirauch, in Worms, Germany. While living in Germany, Emma met her beloved husband, the late Richard Mann, while he was serving the United States Army and stationed in Germany. They were united in marriage on May 25, 1961 and blessed to have shared over 54 years together and with their three daughters: Barbara, Sylvia, and Sandra. Due to Richard serving his country, Emma and the family transferred to different duty stations. Their list of transfers include Germany twice, Oklahoma, and finally to Fort Leonard Wood in 1976, where the Mann family placed their roots. Emma was adored and loved by many. Emma never knew a stranger, a commissary shopping experience could last hours. She seemed to know someone in every aisle. Emma showed her love for her friends and family by hosting afternoons filled with an exchange of riveting stories, laughter, a hot cup of coffee, and a 'few' rounds of cards. If you were lucky enough, there might be a slice of her famous German Cheesecake waiting for you. In December 2015, Emma moved to Camdenton, Missouri, to be closer to her daughter, Sylvia, and Emma's greatest joy: her family. Emma will be missed dearly, but fondly remembered by all those that knew and loved her. She leaves to cherish her memory her three children: Barbara Jean Furey (Jack) of Cedarburg, WI, Sylvia Jean Calvo (Greg) of Camdenton, MO, and Sandra Jean Wigger (Michael) of Lee's Summit, MO; nine grandchildren: Vicente Calvo (Sarah) of Summerfield, FL, Natalie Raynor (Andy) of Leander, TX, Victor Calvo of Overland Park, KS, Jacob Furey (MaryBeth), Jordan Furey, James Furey all of Cedarburg, WI, Jay Cody of Portland, OR, Amanda Wigger of Independence, MO, and Tyler Wigger of Lee's Summit, MO; eight great grandchildren: Felix, Ari, Lazarus, Silas, Elijah, her namesake Emma, Zeke, and Olivia; four sisters: Elizabeth, Ilse, Ann, and Hanni; numerous nieces, nephews, other relatives and dear friends. In addition to her parents, Emma was preceded in death by her husband, Richard Mann; and one sister. Even though she is gone from our sight, her kind and loving heart towards others will live on in our hearts forever. Private family services were held at 1:00 p.m. Monday, April 11, 2022 in the Memorial Chapels and Crematory of Waynesville / St. Robert with Rev. Steve Jones officiating. Burial was in the Missouri Veterans Cemetery of Waynesville. Services were under the care and direction of Memorial Chapels and Crematory of Waynesville / St. Robert. Memorial contributions may be made to the American Lung Association and sent to American Lung Association, National Direct Response, PO Box 756, Osceola WI 54020-0756 or online at https://action.lung.org.

Emma Oertel Mann, age 84, passed away peacefully in her sleep with her daughter Sylvia by her side at her home, on Monday March 31. Emma was born April 19, 1937 to the late Johann Weirauch and Anna (Schepp) Weirauch, in Worms, Germany.... View Obituary & Service Information

The family of Emma Oettel Mann created this Life Tributes page to make it easy to share your memories.

Emma Oertel Mann, age 84, passed away peacefully in her sleep...