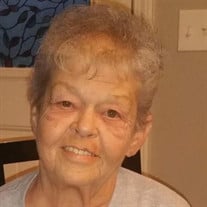 Emma Jean “Enkie” Rutko, daughter of the late Everett and Lillie (Martin) Murray, was born January 27, 1949 in Cherryville, Missouri. She passed away Monday, July 15, 2019 in the Mercy Hospital of Springfield, Missouri having attained the age of 70 years, 5 months and 19 days. Enkie, as she was known by her family and friends, spent most of her life in Waynesville, Missouri except for a short time in St. Louis, Missouri while she was in the 3rd grade. Enkie was a hardworking woman and took great pride in helping to provide for her family. She drove a school bus for Waynesville for 21 years, was a cook on Fort Leonard Wood for 15 years, worked at Algoa for 1 year and also worked in local bars for 21 years. She made several friends while working for the Godfrey family at The Club. Enkie was united in marriage to Arthur Leslie Rutko on September 1, 1983 in Crocker, Missouri. They shared over 31 years of marriage together before he preceded her in death on May 5, 2015. In her spare time, Enkie was an avid collector of Elvis paraphernalia and M&M. She was known in the area for making some of the best peanut brittle and coconut candy. It was a well-known fact that Enkie loved to play Bingo. She also enjoyed playing cards and dice with her family and friends as well. She was a member of the VFW Post #3186 Ladies Auxiliary and a lifetime member of the American Legion #331 Ladies Auxiliary. Most importantly, she took care of her family and was always putting them first. Enkie leaves to cherish her memory two children: Melissa Downs of St. Robert, MO and Wayne Kitchens of St. Robert, MO; one granddaughter: Terra Downs of Rogersville, MO; four great grandchildren: Alithyia, Peytience, Mason and Carlie; four siblings: Herman Murray of Richland, MO, Randy Murray (Vickie) of Lacey Springs, AL, Alice “Punkie” Murray of Waynesville, MO and Edna Nelson (Bill) of Columbia, MO; several nieces, nephews, other relatives and friends. In addition to her parents and husband, Enkie was preceded in death by five siblings: Clifford Murray, Raymond Murray, Erma Skinner, Henrietta Juede and Rose Schnieder. Even though she is gone from our sight, she will live on in our hearts forever. Funeral services were held at 2:00 p.m. Tuesday, July 23, 2019 in the Memorial Chapels and Crematory of Waynesville / St. Robert with Pastor Dany Graves officiating. The songs “Amazing Grace” by Elvis Presley, “When I Get Where I’m Going” by Brad Paisley, “Sissy’s Song” by Alan Jackson and “Jealous of the Angels” by Donna Taggart were played. Serving as escorts were family and friends. Burial followed in the Sunset Memorial Estates Cemetery of Waynesville. Memorial contributions may be made in memory of Enkie Rutko and may be left at the funeral home.

The family of Emma Jean "Enkie" Rutko created this Life Tributes page to make it easy to share your memories.