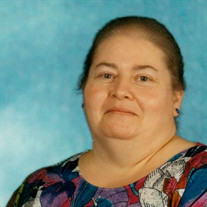 Erma Lee Skinner, daughter of the late Everett and Lillie (Martin) Murray, was born December 12, 1944 in Waynesville, Missouri where she grew up and attended school. At an early age, Erma made a profession of faith and was a member of the Hilltop Christian Church of Crocker, Missouri. Erma met a young man that dated her older sisters by the name of Charles Morris Skinner. They knew each other their whole life and eventually they married on November 18, 1960 in Crocker, Missouri. They were blessed with 48 years of marriage together and two children: Charles and Carla. Erma was a hardworking woman and worked at Lodge of Four Seasons, the Lee Plant in Richland, Handicap Workshop in Crocker and also for the Crocker school system as a janitor and in the cafeteria. In her spare time, Erma enjoyed sewing, crocheting and arts and crafts. She was very talented with quilting and made a lot of quilts for her family and friends. She was lovingly called by her loved ones as “Granny Gert”. Erma passed away Monday, October 2, 2017 in the Lake Regional Medical Center of Osage Beach, Missouri having attained the age of 72 years, 9 months and 21 days. She will be sadly missed, but fondly remembered by all those that knew and loved her. Erma leaves to cherish her memory, her two children: Charles Skinner of Crocker, MO and Carla Bradish of Waynesville, MO; five siblings: Herman Murray of Richland, MO, Alice Murray of Waynesville, MO, Edna Nelson of Columbia, MO, Enkie Rutko of St. Robert, MO and Randy Murray of Lacy Springs, AL; three grandchildren; five great grandchildren; many nieces, nephews, other relatives and friends. In addition to her parents, Erma was preceded in death by her husband: Charles Skinner; two sisters: Henrietta Juede and Rose Schneider; and two brothers: Clifford and Raymond Murray. Services were held at 12:00 p.m. Saturday, October 7, 2017 in the Memorial Chapels and Crematory of Waynesville / St. Robert with Pastor Bill Clairborne officiating. The songs “I Want to Stroll Over Heaven With You” as recorded by Erma and “Go Rest High on that Mountain” were played. Serving as escorts were James Recio, Pat Fincher, Chad Lange, Terry Murray, Ron Todd and B.J. Medlen and serving as honorary escort was Bill Clark. Burial followed in the Antioch Cemetery near Crocker, Missouri. Memorial contributions may be made in memory of Erma Skinner and may be left at the funeral home.

Erma Lee Skinner, daughter of the late Everett and Lillie (Martin) Murray, was born December 12, 1944 in Waynesville, Missouri where she grew up and attended school. At an early age, Erma made a profession of faith and was a member of the Hilltop... View Obituary & Service Information

The family of Erma L. Skinner created this Life Tributes page to make it easy to share your memories.