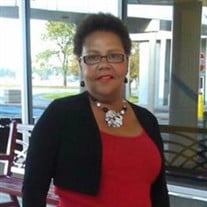 Erma Jean Thomas, daughter of J.W. Banks and Sarah (Collins) Banks, was born September 24, 1958 in Helena, Arkansas where she grew up and attended school. On January 5, 1978, Erma was united in marriage to James Lee Thomas in Helena, Arkansas. They shared over 40 years of marriage together and were blessed with three children: James, Jr., LaSaundra and Nija. Due to James being in the military, Erma and the family moved to different duty stations with James. They were stationed in Germany, Ft. Riley (KS), Ft. Leonard Wood (MO) and Ft. Stuart (GA). During that time, Erma worked as a civil service employee with different departments on the military bases. She worked as a supply technician, as a fabric worker in the uniform facility and also worked in the dining facility. In her spare time, Erma enjoyed being outdoors working in her garden and was also talented when it came to sewing. She loved to travel and see the different parts of the country and also going shopping with family and friends. The most important part of Erma’s life was her family. She treasured each and every one of them and was so very proud of her children and grandchildren. She loved spending time with them and looked forward to every family get together. Erma passed away Tuesday, July 24, 2018, in Phelps County Regional Medical Center in Rolla, Missouri having attained the age of 59. Erma will be sadly missed, but fondly remembered by all those that knew and loved her. She leaves to cherish her memory her husband, James of the home; three children, James Thomas Jr. of St. Robert, MO, LaSaundra Henderson (Ardell) of Grand Rapids, MI, and Nija Thomas of St. Robert, MO; three grandchildren: Jaylan Thomas, Ardell Henderson IV and Camden Henderson; her mother, Sarah Banks of Helena, AR; twelve siblings: Melvin Banks (Janet) of Helena, AR, Linda Hayden (George) of Helena, AR, Janice Banks of Helena, AR, Cassandra Early (Larry) of Memphis, TN, Tommy Ray Banks, Sr. (Wanda) of Memphis, TN, Karen Curry of Memphis, TN, Anthony Banks Sr., (Crystal) of Turrell, AR, Patrick Banks, Sr. (Chevon) of Scott, AR, Patricia Jernigan (Bill) of Minneapolis, MN, Cora Banks of Plant City, FL, Tommy Jonathan Banks of Minneapolis, MN and Authur Ivory (Carolyn) of Indiana; her grand-dog: Clause; a number of nieces and nephews; as well as a host of other relatives and friends. Erma was preceded in death by her father, J.W. Banks. Services were held at 10:00 a.m. Monday, July 30, 2018 in the Memorial Chapels and Crematory of Waynesville / St. Robert with Rev. Anthony Banks, Elder Ardell Henderson, Jr., and Elder Ardell Henderson III officiating. Serving as escorts were Melvin Banks, Sr., Anthony Banks, Sr., Ardell “TJ” Henderson IV, Alexander Brooks, Dave Scales and Micheal Wilson. Burial followed in the Missouri Veterans Cemetery of Waynesville.

Erma Jean Thomas, daughter of J.W. Banks and Sarah (Collins) Banks, was born September 24, 1958 in Helena, Arkansas where she grew up and attended school. On January 5, 1978, Erma was united in marriage to James Lee Thomas in Helena, Arkansas.... View Obituary & Service Information

The family of Erma Jean Thomas created this Life Tributes page to make it easy to share your memories.