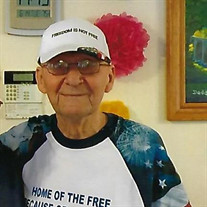 On Friday, May 4, 2018, SFC (Ret) Ernest “Ernie” Eugene Cole passed away from complications related to heart surgery. He was born January 16, 1939 to Perina and Lloyd Cole in Healdsburg, California. Ernie proudly served his country in the United States Army for 24 years retiring in 1980. During his military tenure, he lived in California, Missouri, Korea and Germany where he met his wife Marianne. They were united in marriage on July 1, 1960. Ernie earned several awards and commendations while in the military; some of which include: National Defense Service Medal, Vietnam Service Medal w/1 Silver Service Star, Vietnam Service Medal w/1 Bronze Service Star, Republic of Vietnam Campaign Medal, Good Conduct Medal (7th Award), Meritorious Service Medal, Army Commendation Medal and Expert Qualification Badge M-16. After his time in the military, Ernie worked at Hugh Palmer in Lebanon from 1982-1984, Police Dispatch for the cities of Richland and Crocker and also continued to serve his country as a civil service employee for 23 years on Fort Leonard Wood (Heavy Equipment Mechanic 1982-1987 & Laundry Supply Driver 1990-2003). Ernie was a lifetime member of the Veterans of Foreign Wars Post 3168, Disabled American Veterans and the American Legion. In his spare time, he enjoyed being outdoors while hunting and fishing. Most importantly, he loved his family and loved spending time with them. Ernie leaves to cherish his memory his wife: Marianne Cole of Waynesville, MO; two children: Linda Schonbok and husband Robert of Waynesville, MO and James Cole of Elgin, OK; one sister: Carol Miller of Healdsburg, CA; two grandchildren: Michael Schonbok of Ft. Campbell, KY and Andrea Cole of Lawton, OK; niece: Sheila Anderson of Healdsburg, CA; nephew: Doug Miller of Healdsburg, CA; best friend: Scottie Taylor of Waynesville, MO; other relatives and friends. He will be missed and remembered by all who had the pleasure to know him for his friendship and love of life. Services were held at 2:00 p.m. Tuesday, May 8, 2018 in the Memorial Chapels and Crematory of Waynesville / St. Robert with Pastor Chris Hendrix officiating. The songs “Amazing Grace” and “Dancing in the Sky” were played. Serving as escorts were the United States Army of Fort Leonard Wood, Missouri. Burial with military honors followed in the Sunset Memorial Estates Cemetery of Waynesville with Chaplain (CPT) Jordan Henricks officiating. Military honors were provided by the United States Army of Fort Leonard Wood, Missouri. Memorial contributions may be made in memory of Ernie Cole to the Waynesville / St. Robert Senior Center and may be left at the funeral home.

The family of SFC (Ret) Ernest Eugene Cole created this Life Tributes page to make it easy to share your memories.