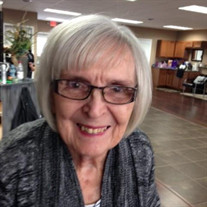 Esther Teague, daughter of the late Clarence Merriman, Sr. and Hallie (Flenner) Merriman, was born February 12, 1930 in Trevlac, Indiana. As a young girl, she grew up in Helmsburg, Indiana where she graduated with the Class of 1948 from Helmsburg High School. On June 17, 1950, Esther was united in marriage to Herbert L. Teague in Indianapolis, Indiana. They shared over 33 years of marriage together before he preceded her in death in 1983. Esther and Herbert were blessed with three children: Betty, Richard, and Howard. Esther and the family moved to the Waynesville area and she began working as a civil service employed on Fort Leonard Wood. She served in the AG Section Chief from 1964 – 1988 and retired after 24 years of service. In her spare time, Esther loved listening to country music, but especially George Strait. She was a prolific reader and did crossword puzzles for years. Esther was also a talented artist and oil painted for many years. Most importantly, she loved her family and treasured the times that she could spend with them. While still in Indiana, Esther was a member of the Bear Creek Baptist Church of Bear Creek, Indiana. Esther passed away Thursday, May 6, 2021 in the Mercy Hospital of Lebanon, Missouri having attained the age of 91 years. She will be sadly missed, but fondly remembered by all those that knew and loved her. Esther leaves to cherish her memory, her three children: Betty Breedlove of Waynesville, MO, Richard Teague (Cheryl) of Waynesville, MO, and Howard Teague of Casselberry, FL; six grandchildren: Amelia Hinton (Stephen) of Lee’s Summit, MO, Jason Teague (Shannon) of Waynesville, MO, Rebecca Morgan of Springfield, MO, Charles Breedlove of Waynesville, MO, Jessica Giancola (Chris) of Lebanon, MO, and Ryan Teague of Casselberry, FL; six great grandchildren: Trever, Jacob, Jase, Aria, Harrison, and Thomas; one brother: Jr. Merriman (Mary) of New Whiteland, IN; one sister: Marie Fishel (Stan) of Unionville, IN; one sister-in-law: Vivian Matthews of Lawrence, IN; several nieces, nephews, other relatives, and friends. In addition to her parents and husband, Esther was preceded in death by three sisters: Dora Merriman, Louise, VanDover, and Rose Beauchamp; and four brothers: Wayne Merriman, Franklin Merriman, George Merriman, and James Merriman. Funeral services were held at 11:00 a.m. Wednesday, May 12, 2021 in the Memorial Chapels and Crematory of Waynesville / St. Robert with Pastor Danny Graves officiating. The songs "I Cross My Heart" and "Carrying Your Love with Me" by George Strait and "Going Home" by Libera were played. Serving as escorts were Ryan Teague, Jason Teague, Charles Breedlove, John Leuthen, Chris Giancola, and Gary Clark. Burial followed in the Waynesville Memorial Park Cemetery.

Esther Teague, daughter of the late Clarence Merriman, Sr. and Hallie (Flenner) Merriman, was born February 12, 1930 in Trevlac, Indiana. As a young girl, she grew up in Helmsburg, Indiana where she graduated with the Class of 1948 from Helmsburg... View Obituary & Service Information

The family of Esther Teague created this Life Tributes page to make it easy to share your memories.

Esther Teague, daughter of the late Clarence Merriman, Sr. and...