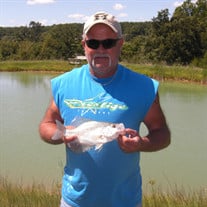 Eugene Edward “Skip” Davis II, son of Eugene Edward and Madeline Katherine Gertrude (Dent) Davis, was born March 27, 1961 in Ft. Leonard Wood, Missouri. Skip grew up in a military family, due to his father being in the Army, and for most of his school years, he attended school in the Laquey R-V School District. In his early working years, Skip worked in a tire shop, but for 19 years he worked for the Waynesville Wastewater Plant. He then began working for MoDot (Missouri Department of Transportation) and served them for 15 years. On June 16, 2006, Skip was united in marriage to Robin Annette (Skelton) Allen in Waynesville, Missouri. They shared over 13 years of marriage together and many life adventures. In his spare time, Skip enjoyed being outdoors; whether it was fishing, hunting, shooting at the gun range or participating in turkey shoots. He also liked to spend time at the Shrine Club with his friends and was an avid Kansas City Chiefs fan. He was especially thrilled when they won Super Bowl LIV this year. Skip passed away Sunday, February 16, 2020, in his home near Waynesville having attained the age of 58 years. He will be sadly missed, but fondly remembered by all those who knew and loved him. Skip leaves to cherish his memory, his wife, Robin of the home; two children, Chris Davis (Lindsay) of Dallas, Texas, and Chasity Davis (Tommy) of Ft. Worth, Texas; seven grandchildren, Ellie, Everett, Cillian, Reese, Brayden, Frank, and Barbara; three sisters, Debra Ortiz of St. Louis, MO, Darlene Johnson of Detroit, MI, and Annette Davis of Jacksonville, FL; several nieces and nephews; as well as a host of other relatives and friends. In addition to his parents, Skip was preceded in death by stepson: Kyle Dean Allen. Celebration of Life services were held at 1:00 p.m. Friday, February 21, 2020 in the Waynesville/Ft. Wood Shrine Club of Laquey, Missouri with Pastor Danny Graves officiating. The songs “Simple Man” by Lynyrd Skynyrd, “Brown Eyed Girl” by Van Morrison and “Daddy’s Little Girl” by The Shires were played. Several friends and family members shared their wonderful memories and stories of Skip. Services were under the direction of Memorial Chapels and Crematory of Waynesville / St. Robert. Memorial Contributions in memory of Eugene “Skip” Davis II may be left at the funeral home.

Eugene Edward &#8220;Skip&#8221; Davis II, son of Eugene Edward and Madeline Katherine Gertrude (Dent) Davis, was born March 27, 1961 in Ft. Leonard Wood, Missouri. Skip grew up in a military family, due to his father being in the Army,... View Obituary & Service Information

The family of Eugene "Skip" Davis created this Life Tributes page to make it easy to share your memories.