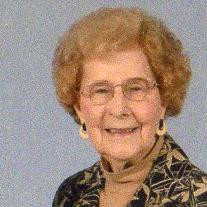 Eunice Mae Prewett, daughter of John Walter Crick and Neoma Ruth Wolf Crick Rowden, was born February 28, 1925 in Independence, Missouri. At a young age, Mae experienced the loss of a parent when her father died. Neoma remarried and Mae was raised by her mother and stepfather, Florence C. Rowden. Mae moved to Richland with her family in 1931. She attended school in Stoutland for a time before transferring to Richland where she graduated with the Class of 1943. While attending school in Richland, Mae met a handsome young man by the name of Pryor Ray Prewett. They became high school sweethearts and were united in marriage on July 22, 1943 in Waynesville, Missouri and they shared the next 71 years of marriage together. Mae and Pryor Ray were blessed with two children, Johnny Ray and Tamarah. Mae made a profession of faith and accepted Jesus Christ as her Savior. She was baptized in Sellers Creek by Bro. J.O. Brown in November 1945. In 1951, Pryor Ray accepted the call to preach and Mae also responded to that call. She was a wonderful pastor’s wife and loved serving in the churches where Pryor Ray pastored. Mae was a longtime member of the First Baptist Church of Richland and was very active in the WMU - Templeton group until her health began to decline. During her working years, Mae worked for a short time as a telephone operator. But when asked what she did for the majority of her working years, Mae’s response was that she was a housewife, mother, pastor’s wife and caregiver. She loved being a caregiver to several children over the years while their parents were working. She loved each and every one of them as if they were her own. In her spare time, Mae enjoyed doing craft, knitting and did sewing for about everyone in the community. She loved going to yard sales and auctions and was always looking for a great bargain. Mae also liked to do yoga and even within the last couple of years would show her caregivers some yoga positions. Mae loved her family deeply and was proud of each and every one of them. Her love for her family was an extension of her love for Christ and she took great pride in caring for them. Mae went home to be with her Lord, where she heard “Well done thou good and faithful servant”, at 9:28 p.m. Thursday, August 18, 2016 in the Lake Regional Hospital of Osage Beach, Missouri having attained the age of 91 years. She will be sadly missed but fondly remembered by all those that knew and loved her. Mae leaves to cherish her memory, her two children: Johnny Ray Prewett and his wife, Margaret of Richland, MO and Tamarah Newell and her husband, Richard of Richland, MO; 2 grandchildren: Travis Prewett and his wife Olivia of Richland, MO, and Kasie Lercher and her husband, Brock of Richland, MO; 2 great grandchildren: Brooklynn Lercher and Sylvia Prewett; three sisters: Donna L. Gilbert of Springfield, MO, Betty A. Wells of Palm Springs, CA and Lois J. Gore of North Little Rock, AR; one sister-in-law: Berneice Brackett of Richland, MO; a number of nieces, nephews, and a host of other relatives and friends. Mae was preceded in death by her father: John Walter Crick; mother: Neoma Ruth Wolf Crick Rowden; stepfather: Florence C. Rowden; one sister: Vivian R. Vaughan; and her loving husband: Pryor Ray Prewett. Even though she is gone from our sight, she will live on in our hearts through the memories that we share of this sweet and loving lady….Mae Prewett. Funeral services were held at 3:00 p.m. Sunday, August 21, 2016 in the First Baptist Church of Richland with Pastor Bob Lilly and Pastor Doug Jacobsen officiating. Pianist Marleen Brown accompanied soloist Merrell Breyer as he sang “It Is Well With My Soul”. Serving as escorts were Travis Prewett, Brock Lercher, Kevin Harrell, Bill Burd, Jeff Scheeley, and Merrell Breyer. Serving as honorary escorts were Cleamon Scheeley, Tim, Beth and Kelli Hardesty and Holli Bryant. Burial followed in the Oaklawn Cemetery of Richland, Missouri. Services were under the direction of Memorial Chapel of Richland. Memorial contributions may be made in memory of Mae Prewett and may be left at the funeral home.

The family of Eunice "Mae" Prewett created this Life Tributes page to make it easy to share your memories.