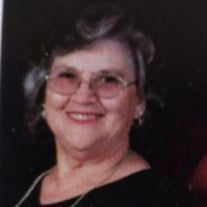 Evalyn Olive Sprucebank, born June 16, 1940 to Marvin Warren Carroll and Fannie Charlotte (Sloan) Carroll in Richland, Missouri, and passed away on Tuesday, April 5, 2022, while in the Lake Regional Health Care System, Osage Beach, Missouri, having attained the age of eighty-one. She grew up in Richland, where she attended school. Evalyn made a profession of faith at a young age, following in baptism, and was a member of Assembly of God Church. Evalyn married Roscoe Edmond Decker on November 25, 1961 and were shared over thirty-nine years before Roscoe’s passing on September 13, 2000. Evalyn found love once again and was united in marriage to Irvin Brent Sprucebank, Jr., on December 8, 2002 at Grace Baptist Church of Richland, by Pastor Rocky Harris. They experienced much joy and laughter during their nineteen years together before “Spruce” passed on April 18, 2021. Evalyn lovingly cared for her home as she raised her four children that God had blessed her with. She enjoyed many things in life however, her greatest joys in life were times spent with her children and grandchildren. She was totally devoted and proud of each one. Evalyn always had an effervescent personality with a bit of sassiness mixed in; and a smile could light up any room. She loved to joke around and have a good time. Evalyn loved people and never had met a stranger. Evalyn possessed a heart of gold and enjoyed helping others. One of Evalyn’s favorite things to do was go to the American Legion to play Bingo. Back in the day, she and Spruce were highly involved in service to the Legion before their health caused them to take a step back. She loved the people and the comradery that came along with great fun. Evalyn enjoyed being outdoors dabbling in her yard while tending to her climbing red roses she loved so much. Evalyn leaves behind to cherish her memory her four children, Janice Lucas (Alan) of Cambridge, England, Jacquetha Owens (Craig) of Jacksonville, FL, Warren Decker (Kaleese) of Richland, MO, and Donald Decker (Sarah) of Richland, MO; one sister, Peggy Wilson (Dean) of Richland, MO; 6 grandchildren; numerous great grandchildren; several nieces, nephews, other relatives, and friends. She is preceded in death by her parents, brothers: William “Marvin” Carroll (7/6/1962), Gary Lee Carroll (3/30/2019), D. “Wayne” Carroll (1/10/2012), and one sister, Wanda S. Jones, two beloved granddaughters: Jamie Lynn Decker and Hannah Renea Decker. Evalyn left her stamp on the hearts of many throughout her life and will forever be remembered and greatly loved. Services were held at 11:00 a.m., Monday, April 11, 2022, in the Memorial Chapel of Richland with Pastor Danny Graves officiating. Recorded songs “Amazing Grace,” “Go Rest High on That Mountain,” and “Just One Rose Will Do” were played. Inurnment followed in the Oaklawn Cemetery of Richland, Missouri. Services were under the care and direction of Memorial Chapel of Richland. Memorial contributions may be made in memory of Evalyn (Carroll) Decker - Sprucebank and can be left at the Memorial Chapel of Richland. Online condolences may be left at www.memorialchapelsandcrematory.com

The family of Evalyn Olive (Carroll) Decker-Sprucebank created this Life Tributes page to make it easy to share your memories.