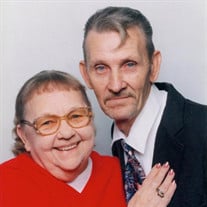 Evelyn “Lucille” Moore, daughter of the late Claude Bowling and Mary Mae (Knapp) Bowling Ross, was born September 25, 1929 in Holiday, Texas. As a young girl, Lucille and her family moved back to the Pulaski County area. She attended and graduated from Stoutland High School. While in high school, she could type faster than all the other students. She also loved to bowl and would look for every opportunity to go bowling. In the 1930s, Lucille worked at the Jones Clothing Store in downtown Waynesville. She later worked for the Waynesville School District as a cook. Most of the time, she was able to stay at home with her family and raise her children. On May 10, 1974, Lucille was united in marriage to Lester Moore in Waynesville, Missouri. They shared over 40 years of marriage together. In her spare time, Lucille enjoyed listening to gospel music, working in her gardens and babysitting. She was a member of the Deerlick Baptist Church and attended every time she was able. Lucille passed away Monday, February 9, 2015 in the Nixa Nursing and Rehab Center of Nixa, Missouri having attained the age of 85 years, 4 months and 15 days. Lucille leaves to cherish her memory her husband: Lester Moore of Plato, MO; one daughter: Dana Sutton of Ozark, MO; one son: Kellis Williams of St. Petersburg, FL; one step-daughter: Julia Ramsey; nine grandchildren: Mary Doyle of Bucyrus, MO, Evelyn Klein of Mtn. Grove, MO, Billie Alkire of Seminole,FL, Ericka Bettes of Roby, MO, Aaron Neeley of Bucyrus, MO, Shane Kellis Williams of Seminole, FL, Beverly Chestine of Bucyrus, MO, Amanda Williams of England, and Jacob Wilson of Seminole FL; other relatives and friends. In addition to her parents, Lucille was preceded in death by one brother: Clarence Bowling; one sister: Edna Mae Harwood; and one daughter: Evelyn Gail Williams. Funeral services were held at 2:00 p.m. Saturday, February 14, 2015 in the Deerlick Baptist Church of Waynesville, Missouri with Pastor Danny Graves officiating. The songs “If I Could Only Fly”, “The Gift” and “My Angel” were played. Serving as escorts were Austin Lansdown, Harrison Moore, Eddie Graves, Aaron Neeley, Kyle Williams, Kevin Massey, Terry Bettes and Jimmy Williams. Serving as honorary escorts were Corey Crumm, Nathaniel Alkire, Harvey Moore, Donnie Ray Bowling, Darren Bowlin and Dallas Chestine. Burial followed in the Deerlick Cemetery of Waynesville, Missouri. Services were under the direction of Memorial Chapels and Crematory of Waynesville / St. Robert. Memorial contributions may be made in memory of Evelyn “Lucille” Moore and may be left at the funeral home.

Evelyn &#8220;Lucille&#8221; Moore, daughter of the late Claude Bowling and Mary Mae (Knapp) Bowling Ross, was born September 25, 1929 in Holiday, Texas. As a young girl, Lucille and her family moved back to the Pulaski County area.... View Obituary & Service Information

The family of Evelyn Lucille Moore created this Life Tributes page to make it easy to share your memories.

Evelyn “Lucille” Moore, daughter of the late Claude Bowling and...