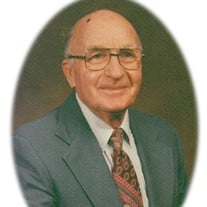 Ewell Wood was born August 29, 1919 on the family farm in Flippin, Arkansas to Lee and Dora Wood and departed this life on May 6, 2016 at his home in Springfield, Missouri having attained the age of 96 years, 8 months and 7 days. He graduated from Yellville School and on September 13, 1937 he married Alma Stice and to the union four children were born. He farmed with his father and brothers until moving his family to Waynesville in 1953 to work for Mac’s Cleaners, the Ft Leonard Wood PX System and ultimately became Manager of the Fort Leonard Wood Quartermaster Laundry. He later married Orpha Good. In 1975 he transferred to the Ft Riley, KS Laundry, then in 1981 accepted the Laundry Manager Position in Ft Clayton, Panama where he worked until transferring back to Ft Riley in 1986 when he retired from Civil Service. He returned to his Arkansas roots and lived in Mountain Home until 2002 when he moved to Springfield to be near his children. He enjoyed travel, gardening and St Louis Cardinal Baseball, but the light of his life was always his children, grandchildren and great grandchildren. Ewell was a member of the Mountain Home Masonic Lodge #225, Mountain Home, AR; the Scottish Rite, Joplin, MO; Member of Abou Ben Adhem, Springfield, MO, The Twin Lakes Shrine, Twin Lakes, AR, and was Past Rajah of the Pulaski County-Ft. Leonard Wood Shrine. He was welcomed in Heaven by his brothers: Jenks, Corbin, Nin, Russell, Bernard, Thurman, William, Leonard, Lucian, Lucian, his only sister, Erma and his daughter Glenda. He is survived by his brother Earl of Flippin, AR; his children Fred Wood (Becky) of Springfield, MO, Brenda Kae Daugherty (Gerry) of Springfield, MO and Scott Wood (Erica) of Worthington, MO. Three Grandchildren, Erin Baker of Columbia, MO; Matthew Wood of Laquey, MO and Charlene Squires of Minot, ND; and six great grandchildren, Max, and Sam Baker, and Donovan, Madyson, Shelby and Olivia Wood. His seventh great-grandchild, Theodore Squires, will be born on July 20. While Ewell lived in Arkansas, he spent many hours transporting children to the St. Louis Shriners’ Children’s Hospital. It was his wish that in lieu of flowers, contributions be made to that hospital. Services were held at 11:00 a.m. Tuesday, May 10, 2016 in the Memorial Chapels and Crematory of Waynesville / St. Robert with Scott Baker reading the obituary and Pastor Danny Graves officiating. Ewell’s daughter, Brenda Kae Daugherty, recalled her wonderful memories of her dad. The song “Go Rest High on that Mountain” was played. Serving as escorts were Matthew Wood, Donovan Wood, Andy James, Mike Wood, Terry Wood, Jim Snipes, Scott Baker, Max Baker and Dave Brown. Serving as honorary escorts were Bill Tryan, Corbin Lee Wood, Same Baker, Larry Lercher, Wayne Anderson and Chuck Thompson. Burial followed in the Hopewell Cemetery of Big Piney, Missouri.

Ewell Wood was born August 29, 1919 on the family farm in Flippin, Arkansas to Lee and Dora Wood and departed this life on May 6, 2016 at his home in Springfield, Missouri having attained the age of 96 years, 8 months and 7 days. He graduated... View Obituary & Service Information

The family of Ewell Theodore Wood created this Life Tributes page to make it easy to share your memories.