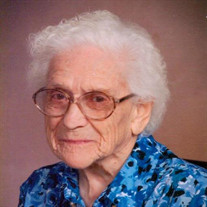 Florence G. White LaMountain of Waynesville, Missouri was born on September 25, 1915 and departed this life March 30, 2018 at the Richland Care Center of Richland, MO. She had attained the age of 102 years 6 months and 5 days. Born in Essex, New York the daughter of Dean George and Albena (Progin-Boardman) White. She attended the Big Rock District School (a one room school house) through the 8th grade then graduated from Elizabethtown High School. She married Reginald Joseph LaMountain Sr. on May 30, 1934. They shared 39 years of marriage and had 2 sons, Reginald Joseph LaMountain Jr. and Roger James LaMountain. Florence lived 95 years of her life in the beautiful Adirondack Mountains just a few miles from Lake Champlain and 60 miles from the Canadian border. On June 21, 1946 Florence and her husband purchased a two-story house in the quaint little town of Willsboro, N.Y. where she lived until October 2010. By this time Florence was 95 years old and her sons moved her out West to live with her son Roger and daughter-in-law Pauline LaMountain in Waynesville, Missouri. Even though she adjusted well to her new living location she never forgot her great love for her home, friends and life in the Adirondacks. She was a long time member of the Willsboro Methodist Church. Florence enjoyed and was an expert at hanging wallpaper. She earned her living as a domestic housekeeper and cook for many years and retired at the age of 90. She enjoyed parties, visits with family friends, music, especially the banjo and deep bass singers. She enjoyed Gospel singings with the potluck suppers. She was very humorous and enjoyed joking around with family and friends. She is survived by one son and daughter-in-law, Roger and Pauline LaMountain of Waynesville, MO one daughter-in-law Shirley LaMountain of Elkhorn, Nebraska, one sister-in-law, Lunett White of Elizabethtown, N.Y., 7 grandchildren and their spouses Sheilla and Dana Dea, Susan and Jack Einrem, Sherlyn and Bill Evans, Steven and Michele LaMountain, Reda and Todd Tomason, Robin and Paul Smith, Randy and Deborah LaMountain, 17 great grandchildren and 16 great-great grandchildren, several nieces and nephews, other relatives and friends. She was predeceased in death by her parents Dean and Albena White, her husband Reginald LaMountain Sr., 1 son Reginald LaMountain Jr., brothers; half brother Walter Boardman, Gilbert White, Theodore White, 3 sisters; Aletha (White) Watson, Grethel (White) Myers, and Etta (White) Potter.

Florence G. White LaMountain of Waynesville, Missouri was born on September 25, 1915 and departed this life March 30, 2018 at the Richland Care Center of Richland, MO. She had attained the age of 102 years 6 months and 5 days. Born in Essex,... View Obituary & Service Information

The family of Florence G. LaMountain created this Life Tributes page to make it easy to share your memories.