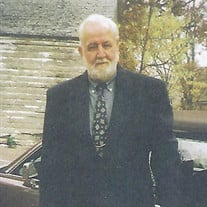 Frank Lee Breeden, son of the late Ralph Knowlten and Mary Lea (Helton) Breeden, was born December 31, 1935 in Waynesville, Missouri, where he grew up and graduated from Waynesville High School with the Class of 1953. While in school, he was very active in the FFA (Future Farmers of America). As a young boy, Frank made a profession of faith and was baptized on May 4, 1947 and was a member of the Mt. Gibson Baptist Church in Waynesville. On August 4, 1955, Frank married Lois Faye Biram and they were blessed with four children: Craig, Mary Ann, Randy and Danny. Most of his working years, Frank worked on the family farm, but he also drove a truck for a time. Frank also worked at Post Exchange and Davis Cleaners, both located on Fort Leonard Wood. Frank loved every aspect of the farming life and especially enjoyed going to cow sales. He also liked to go deer hunting, and watching football, but most importantly, he loved spending time with his family, especially the grandchildren. He was the best grandpa and his grandkids loved being around him. Frank was a member of the Elks Lodge for many years. Frank went home to be with his Lord Sunday, September 27, 2020 in the Lebanon South Nursing and Rehab Center of Lebanon, Missouri having attained the age of 84 years. He will be sadly missed, but fondly remembered by all those that knew and loved him. Frank leaves to cherish his memory, his three children: Danny Breeden (Bev) of Richland, MO, Craig Breeden (Carolyn) of Bradenton, FL and Mary Ann Nelson (Doug) of Richland, Mo; seven grandchildren: Michael Breeden (Devona) of Marshfield, MO, Jeremy Breeden (Stephanie) of Winter Haven, FL, Eric Breeden (Brittany) of Lebanon, MO, Scott Breeden (Karyssa) of Richland, MO, Ashley Thomas (Drew) of Sand Springs, Ok, Tiffany Retzloff (Chris) of Springfield, MO and Miranda Smallwood (Rick) of Richland, MO; several great grandchildren; one brother: Richard Breeden (Beverly) of Waynesville, MO; several nieces, nephews, other relatives and friends. In addition to his parents, Frank was preceded in death by one son: Randy Breeden; one brother: Knowlten Breeden; and one sister: Lorene Barnes. Funeral services were held at 3:00 p.m. Tuesday, September 29, 2020 in the Memorial Chapels and Crematory of Waynesville / St. Robert with Pastor Richard Breeden, Frank’s brother, officiating. The songs “I Wish Grandpas Never Died” by Riley Green, “When We All Get to Heaven” by Alan Jackson and “Give Heaven Some Hell” by Hardy were played. Serving as escorts were Scott Breeden, Ashley Thomas, Drew Thomas, Michael Breeden, Eric Breeden, Ryan Breeden, Kevin Breeden and Noah Thomas. Burial followed in the Crocker Memorial Park Cemetery of Crocker, Missouri. Memorial contributions may be made in memory of Frank Breeden and may be left at Memorial Chapels and Crematory of Waynesville / St. Robert.

Frank Lee Breeden, son of the late Ralph Knowlten and Mary Lea (Helton) Breeden, was born December 31, 1935 in Waynesville, Missouri, where he grew up and graduated from Waynesville High School with the Class of 1953. While in school, he was... View Obituary & Service Information

The family of Frank Lee Breeden created this Life Tributes page to make it easy to share your memories.