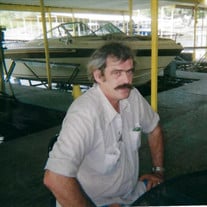 Frank Cerry Meyer was born at Ft. Leonard Wood, Missouri, on June 23, 1956, to Burnell Chris Meyer Sr., and Frances Louise (Curtis) Meyer. Throughout Frank’s life he lived in the small communities of Swedeborg, Richland, and Stoutland and was a 1974 graduate of Stoutland High School. After graduating Frank worked briefly at a Nursing Home; he then went on to begin his thirty-three-year career working with the Charger Boat Factory in Richland, Missouri. On February 26, 2005, in Stoutland, Missouri, Frank married the love of his life, Kara Diane (Lair) Seamer. Unfortunately, their time together was brief, as Kara passed away on January 24, 2006 due to a car accident. Frank enjoyed fishing, hunting, relaxing at home, watching westerns, NASCAR, wrestling, working crossword puzzles, or piecing puzzles together while listening to music. He cherished his family and was especially proud of his children, and grandchildren and loved spending time with them when he could. On the morning of Sunday, February 21, 2021, Frank quietly left this world behind having attained the age of sixty-four at his home in Stoutland. He was preceded in death by both of his parents and wife. Frank leaves behind his three children: Renee Binsbacher (Jay) of Montreal, MO, Ricky Meyer, and Kenny Gordon both of Stoutland, MO; 6 grandchildren: Spencer Bodenheimer, Mahayla Bodenheimer, Mark Gens, Kera Binsbacher, James Binsbacher, and Atticus Gordon; his siblings: Barbara Clark (Tommy) of Crocker, MO, Burnell Meyer (Linda) of Evansville, IN, Robert Meyer of Stoutland, MO, Cecil Peterson of Fair Grove, MO, Darold Peterson (Wanda) of Richland, MO, Ronnie Peterson of Halltown, MO, Jenny Novak of Long Lane, MO, and Mary Peterson of Springfield, MO; several nieces, nephews, and a host of other relatives and friends. Frank was a quiet, kindhearted man who enjoyed the simple things in life and will be sadly missed by those who knew and loved him. Services were held at 3:00 p.m., Wednesday, February 24, 2021, in the Memorial Chapel of Richland with Pastor Doug Jacobson officiating. Favorite songs included “Sharing the Night Together’ by Dr. Hook, and “Have You Ever Seen the Rain” by CCR. Serving as escorts were Ricky Meyer, Jay Binsbacher, Tommy Clark, Kenny Gordon, Spencer Bodenheimer, and Darold Peterson. Burial followed in the Stoutland Cemetery, Stoutland, Missouri. In lieu of flowers, memorial contributions are requested in memory of Frank Meyer and can be left at the funeral home. Online condolences can be sent at www.memorialchapelsandcrematory.com.

The family of Frank Cerry Meyer created this Life Tributes page to make it easy to share your memories.