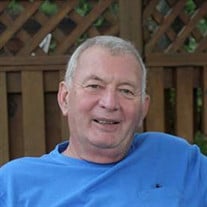 Frankie “Frank” Dale Davenport, son of George and Evelyn (Nicks) Davenport, was born April 22, 1947 in Waynesville, Missouri. He went home to be with his Lord Friday, July 3, 2015 in his home after a hard-fought battle with leukemia having attained the age of 68 years. Frank grew up in Waynesville and graduated from Waynesville High School. Shortly after graduation, Frank entered the United States Navy in 1965 and served his country faithfully through the Vietnam War and until his honorable discharge in 1969. He had earned the rank of AMS 3 (Aviation Structural Mechanic). He served as a helicopter mechanic and earned several awards and commendations. After returning home from the Navy, Frank was united in marriage to the love of his life, Kathryn Kay Williamson on June 30, 1973 at Westside Baptist Church. They shared over 42 years of marriage together and were blessed with two daughters: Julie and Amy. Frank worked for the United States Postal Service in Waynesville as a postal carrier. He served in that capacity for 35 years and retired in 2002. In his spare time, Frank enjoyed being outdoors. You could find him out hunting, fishing, taking his grandchildren fishing, attending swap meets or working in his yard and flowers, which he took great pride in. He collected antique rod and reels and enjoyed making something out of nothing with his swap meet treasures. Frank loved spending time with his family and friends, especially his grandchildren. He was very proud of them. As a young boy, Frank had made a profession of faith and was a member of the Westside Baptist Church where he attended all of his adult life. Frank will be sadly missed by all those that knew and loved him. He leaves to cherish his memory, his wife, Kathy of the home; two daughters: Julie Hagar (Jeff) of Atlanta, GA and Amy Falk (Andrew) of Alexandria, VA; four grandchildren: Drew Falk, Ameerah Falk, Jacob Hagar, and Jackson Hagar; one brother: “Bill” Davenport (Sharon) of Waynesville, MO; nieces, nephews, cousins, other relatives and friends. Frank was preceded in death by his father, George Davenport (1948) and his mother, Evelyn Davenport (1999) and one infant granddaughter, Alaina Kay Falk (2004). Services were held at 10:00 a.m. Tuesday, July 7, 2015 in the Westside Baptist Church of Waynesville with Pastor Lindell Shelden officiating. Soloist Becky Lercher sang “I’ll Fly Away”, “Because He Lives” and “I Saw the Light”. Serving as escorts were Grant Cox, Curt Cox, Alan Clark, Michael Allen, Drew Falk and Mike Case. Serving as honorary escorts were Kenny Foster, Les Williamson, Jack Garzelli and Dwight Hensley. Burial with military honors followed in the Sunset Memorial Estates Cemetery of Waynesville. Military honors were provided by the United States Navy, Little Rock, Arkansas. Services were under the direction of Memorial Chapels and Crematory of Waynesville / St. Robert. Memorial contributions may be made in memory of Frank Davenport to the Myelodysplastic Syndrome Foundation and may be left at the funeral home.

Frankie &#8220;Frank&#8221; Dale Davenport, son of George and Evelyn (Nicks) Davenport, was born April 22, 1947 in Waynesville, Missouri. He went home to be with his Lord Friday, July 3, 2015 in his home after a hard-fought battle with leukemia... View Obituary & Service Information

The family of Frankie "Frank" Dale Davenport created this Life Tributes page to make it easy to share your memories.