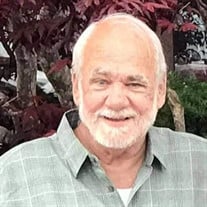 Frankie Joe Tucker, son of the late Reed Parsons Tucker and Pearl Elizabeth (Trower) Tucker was born, February 17, 1959, in Waynesville, Missouri, he grew up in Richland where he attended school, graduating from Richland High School with the Class of 77. After graduating, Frankie went to work at the HD LEE plant in Richland, working there for many years; before going on to OMC Boats, and later Copeland before his retirement. He made a profession of faith and was a member of Shepherds Chapel Church in Arkansas. Frankie loved many things but those that come to mind are spending time with his family; he felt so blessed to be the proud father of his three beautiful daughters and was especially proud of his grandkids. Frankie also enjoyed camping, listening to music, especially Elton John, and the Bee Gees, going to concerts, and visiting the music shows in Branson, MO. Frankie was preceded in death by his father, Reed (1992), mother, Pearl (1999), two sisters: Sharon Kay Evans (2004), Flora Hutton, four brothers: Jack Tucker, Billie Archie Tucker (2005), Ernest Paul Tucker (2020), Clifford “Coon” Lew Tucker (2020). After 62 years in the world, Frankie changed his residence from Lebanon, Missouri, to Heavenly home on the morning of Thursday, July 8, 2021, while in the Boone Hospital Center, Columbia, MO. Frankie leaves behind to cherish his memory, three daughters: Lindsay Carlson of Lebanon, MO, Elisha Melendez (Francisco) of Laquey, MO, and Kristy Williams (Jason) of Richland, MO; 10 grandchildren: Elijah, Sarah, David, & Emily Carlson, Xzavior, Trenton, and Bryant Melendez, Kelsie, Logan, and Jaykob Williams; sister: Ruby Williams of Richland, MO; 2 sister-in-law’s: Sharon Tucker of Richland, MO, and Carol Tucker of Springfield, MO; one brother-in-law: Larry Evans of Lebanon, MO; his faithful dogs: Fergie and Rihanna; several aunts, uncles, nieces, nephews, and a host of other relatives and dear friends. We celebrate Frankie’s life today and know that his family and friends will always treasure the good memories that were made during his lifetime. Services were held at 3:00 P.M., Wednesday, July 14, 2021, in the Memorial Chapel of Richland with Pastor Danny Graves officiating. Music selections included “Candle in the Wind,” by Elton John, “Go Rest High on That Mountain,” by Vince Gill, and “Even Though I’m Leaving” by Luke Combs. Serving as escorts included Jason Williams, Kent “Paul” Sr.” Tucker, Francisco Melendez, Elijah Carlson, Kenneth Carlson, David Carlson, David Tucker, and Everett Mullins. Burial followed in the Oaklawn Cemetery of Richland. Services were under the care and direction of Memorial Chapel of Richland. Memorial contributions may be made in memory of Frankie Joe Tucker and can be left at the funeral home. Online condolences may be left at www.memorialchapelsandcrematory.com

Frankie Joe Tucker, son of the late Reed Parsons Tucker and Pearl Elizabeth (Trower) Tucker was born, February 17, 1959, in Waynesville, Missouri, he grew up in Richland where he attended school, graduating from Richland High School with the... View Obituary & Service Information

The family of Frankie Joe Tucker created this Life Tributes page to make it easy to share your memories.