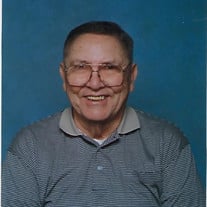 Franklin Garner Pyle, son of the late Albert and Jesse Marie (Davis) Pyle, was born November 30, 1932 in Magnolia, Arkansas. As a young boy, Frank, as he was known by his family and friends, grew up in Smackover, Arkansas where he graduated from high school with the Class of 1952. In March of 1952, Frank was drafted into the United States Army and served his country faithfully until his retirement in 1982. He had attained the rank of Master Sergeant and earned several awards and commendations; some of which include: National Defense Service Medal w/Oak Leaf Cluster, Army Occupation Medal (Germany), Army Commendation w/Oak Leaf Cluster, Vietnam Service Medal w/3 Bronze Service Stars, Republic of Vietnam Campaign Medal w/60 Device, Republic of Vietnam Gallantry Cross Unit Citation w/Palm, Bronze Star Medal, Good Conduct Medal (8th Award), Meritorious Service Medal w/ Oak Leaf Cluster, Army Service Ribbon, Overseas Service Ribbon (2), Non Professional Development Ribbon (1), and Republic of Korea Presidential Unit Citation. On June 26, 1965, Frank was united in marriage to Nellie Ludene Barnes in Newport, Arkansas. They shared over 35 years of marriage together before she preceded him in death on February 18, 2001. After the passing of Nellie, Frank was united in marriage to Opal Marie Pyle and they shared several years together before Opal preceded him in death. After retiring from the military, Frank worked for Central Texas College for 10 years before beginning his time at the Learning Center on Fort Leonard Wood where he served as manager until his retirement. In his spare time, Frank was a member of the Disabled American Veterans Post #49 and the AUSA (Association of the United States Army). He also enjoyed being outdoors while working in his garden or out on the water fishing. He listened to and collected old country and gospel music recordings. Most importantly, he loved his family and enjoyed getting to spend time with them whenever possible. Frank passed away Sunday, December 27, 2020 in the Houston House Nursing Center of Houston, Missouri having attained the age of 88 years. He will be sadly missed, but fondly remembered by all those that knew and loved him. He leaves to cherish his memory, two stepchildren: Charlotte Jones (Michael) of Tiffin, OH and Steve Combs (Lisa) of Crocker, MO; eight grandchildren: Steven Combs of Olathe, KS, Matt Gamblin (Sarah) of Paola, KS, Michael Combs (Kylie) of Dayton, OH, Sabrina Bernt (Michael) of Enterprise, AL, Andrew Combs (Katy) of St. James, MO, Kyle Harrison of Jefferson City, MO, Mindi Green (Scott) of Crocker, MO and Nathaniel Combs of Crocker, MO; several great grandchildren: one great-great grandson; one sister: Charlotte Moran (HB) of Benton, AR; one sister-in-law: Sharon Courtney (Buster) of Raymondville, MO; several nieces, nephews, other relatives, and friends. In addition to his parents and his two wives, Frank was preceded in death by one brother, James Pyle. Services were held at 3:00 p.m. Wednesday, December 30, 2020 in the Memorial Chapels and Crematory of Waynesville / St. Robert with Chaplain (CPT) Matthew C. Ailstock officiating. Steven Combs gave a beautiful eulogy and the songs “When I Get Where I’m Going” and “I Want to Stroll Over Heaven” were played. Serving as escorts were family and friends. Burial with military honors followed in the Sunset Memorial Estates Cemetery of Waynesville. Military honors were provided by the United States Army and the Missouri Honors Team. Memorial contributions may be made in memory of Frank Pyle and may be left at the funeral home.

Franklin Garner Pyle, son of the late Albert and Jesse Marie (Davis) Pyle, was born November 30, 1932 in Magnolia, Arkansas. As a young boy, Frank, as he was known by his family and friends, grew up in Smackover, Arkansas where he graduated... View Obituary & Service Information

The family of MSG (Ret) Franklin Garner "Frank" Pyle created this Life Tributes page to make it easy to share your memories.