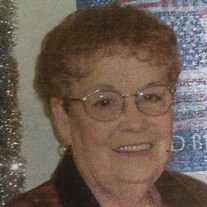 Freddie Kathleen Ewing was born February 12, 1934 in Richland, Missouri and departed this life January 5, 2017 in University Hospital, Columbia, MO. Her parents were Martin Adrian Cundiff and Francis Lucinda Sloan. She had three brothers, Truman, Hugh, and Kenneth. She attended school at Elm Grove, St. Louis, and Stoutland, Missouri, graduating in 1950. Kathleen enjoyed several jobs over the years including Brown Shoe Factory in Richland, Spiegels (in packing, warehouse) in Chicago, Montgomery Ward sales clerk in St. Louis, Save-A-Lot associate manager in St. Ann, MO. She also went to Beautician School and worked at Vatterol Funeral Home in Clayton, MO as a hair dresser. She worked at St. John’s Hospital in Leavenworth KS for 7 years as a CNA, retired in early 1970’s. Kathleen married Vernal Carl (Bud) Thayer in 1955 to which three sons were born: Ken, Ted, and Terry. As the years went by, Kathleen was baptized December 5, 1971 at a Baptist church in Kansas, along with two of her sons. In later years she attended First Christian Church of Richland and First United Methodist of Richland. On December 23, 1980, Kathleen married Harold Reid Ewing and until his death in 2010 shared 30 wonderful years together. They enjoyed square dancing with the Twilight Twirlers, traveling to Texas every winter, enjoying many activities in the community there. Kathleen loved live music shows and crafts. She sewed many square dancing dresses and shirts for the dancers. She had been a member of the American Legion Auxilary. After the death of her husband Harold, she met special friend, Roger Kemerly in Texas. They enjoyed traveling and he cared for her health in her later years. She is preceded in death by her parents, her three brothers, her husband, a son, Terry, a step-daughter Diana Bishop, and special friend Roger Kemerly. She is survived by two sons, Kenneth Hughovid Thayer and his wife Cheryl of Roby, MO, and Ted Clark Thayer of Richland, MO, a daughter-in-law Tonja Thayer of the late Terry Thayer of Lebanon, MO; also her step-children Danny Bishop of Independence, MO, Harold Reid Ewing, Jr. of Linn Creek, MO, Victor Phillip Ewing and his wife Kathy of Florissant, MO, Pamela Jean Morris and her husband Dennis of Sullivan, MO. She is also survived by her grandchildren, Kenny, Kyle, Donna, Dylan, Hope, Nichole, Garrett, Toniah, Dana, Doug, Dwayne, Danny, Jr, Laura, Tony, Elizabeth, Christel, Randy. Also seven great-grandchildren, Layne, Daniel, Alex, Arianna, Audrina, Hailee, and Kain. She is also survived by sisters-in-law, Bea Cundiff of Lebanon, MO and Mary Cundiff of Indiana, two nephews Fred Cundiff of Joplin, MO and Marvin and his wife Jill of Holt Summit, MO and a special niece Norma Huber who was like a daughter to her, and herhusband Don of Richland, MO, and a host of other relatives and friends. Memorial contributions may be made in memory of Freddie “Kathleen” Ewing to the Elm Grove Cemetery and may be left at the funeral home.

The family of Freddie "Kathleen" Ewing created this Life Tributes page to make it easy to share your memories.