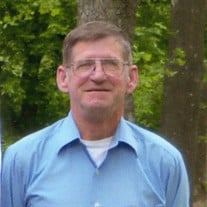 Freddie Dale Posten, son of the late Clyde M. and Mildred Belle (Johnson) Posten, was born on his family’s farm on March 16, 1946 in Pulaski County, Missouri. He left his earthly home to live in the presence of his heavenly Father at 4:12 p.m. November 3, 2015, having attained the age of 69 years. Fred spent his life in Southwest Missouri and Pulaski County, attending school in Waynesville, Missouri. On June 27, 1969, Fred was united in marriage to Mary Gladys Mackney in Richland, Missouri. God blessed the couple with over 46 years of marriage and three precious children, Curt, Kellie and Chad. In 1977 Fred started truck driving over the highways and byways for various companies. Fred was a member of the Masonic Lodge. In Fred’s spare time, he could be found outdoors either hunting, fishing, riding his four wheeler, driving his tractor or just spending time on the farm. He knew no stranger and was a great story teller. Fred loved his friends and family. However, he especially loved his grandchildren, as they were his pride and joy. On the 4th of July, Fred’s motto was “Go Big…or Go Home!” Fred never had a harsh thing to say about anyone. He was a good neighbor and friend to all and will be sadly missed by all those who knew and loved him. He leaves to cherish his memory his loving wife, Mary of the home; his three children: Curt Posten (Terrie) of Richland, MO, Kellie Hosna (Brian) of Lebanon, MO and Chad Posten (Tawnya) of Richland, MO; 8 grandchildren: Kalya Mullins (Bert), Shawna Posten, Derrick Posten, Taylor Posten, Devon Blair, Mackenzie Blair, Tatiana Nekola (Nick) and Kolbe Posten; 6 great grandchildren; three sisters: Norma Rowden (Charlie) of Lebanon, MO, Sue York (Richard) of Laquey, MO and Kay Adamson (Larry) of the state of FL; two brothers: Earl Posten (Pat) and Jerry Posten all of Richland, MO; several nieces, nephews, other relatives and friends and Fred’s beloved little dog, Keystone. In addition to his parents, Fred is preceded in death by his brother, Larry Gene Posten. A memorial service was held at 6:00 p.m., Friday, November 6, 2015 in the Memorial Chapel of Richland with Pastor Harold Elson officiating. Recorded music selections included “Grandpa”, “The Dance” and “Daddy’s Hands.” Memorial contributions may be made in memory of Fred Posten and may be left at the funeral home. Services were under the direction of Memorial Chapels, Richland, MO.

Freddie Dale Posten, son of the late Clyde M. and Mildred Belle (Johnson) Posten, was born on his family&#8217;s farm on March 16, 1946 in Pulaski County, Missouri. He left his earthly home to live in the presence of his heavenly Father at... View Obituary & Service Information

The family of Freddie "Fred" Dale Posten created this Life Tributes page to make it easy to share your memories.