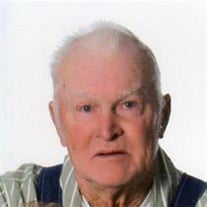 Freddie Gene Jennings, of Swedeborg, Missouri was born on February 26, 1940, in St. Louis, Missouri, son of Fred Clayton and Berchie Ida (Blanton) Jennings, and moved to Swedeborg, Missouri in 1943 and departed this life at 1:15 p.m., Wednesday, April 3, 2019, at Phelps Healthcare Hospital in Rolla, Missouri. Freddie had attained the age of 79 years, 1 month, and 7 days. Freddie was baptized at a young age at the Swedeborg Christian Church and later joined the Swedeborg Church of Christ. Freddie was united in marriage on April 2, 1999 to Kathy June (Criswell) Jennings at Swedeborg, Missouri and got to get his wish to celebrate being married for 20 years before passing. He was preceded in death by his parents, Fred and Berchie Jennings, 3 sons, Larry Gene Jennings, Ronnie Joe Jennings and Terry French, 1 unborn child who was called Baby J, his in-law’s, Jerry and Henrietta Criswell, and 1 sister-in-law, Teresa Lea Criswell. Freddie had worked with and operated Heavy Machinery nearly his whole life, worked for Blanie Construction for eighteen and a half years as an operator and laborer, then went to work for Pulaski County Road and Bridge for twenty-five and a half years, operating a Motor Grader. Freddie enjoyed riding motorcycles and his trike, working on vehicles, farming, working in the hay field, cutting wood and doing custom brush hogging. He enjoyed eating homemade ice cream, and being with family, friends, and collecting International Farmall Tractors. Those left to mourn the passing of Freddie include his wife, Kathy Jennings of the home, five sons, Kenneth Lee Jennings of Swedeborg, MO, Roger Jennings and his wife, Belinda of Hazelgreen, MO, Mark Jennings of Swedeborg, MO, Danny Jennings and his wife, Cheryl of Stoutland, MO, Brian Smith and his wife, Tish of Richland, MO; several grandchildren and great grandchildren; numerous nephews, nieces and other relatives and friends. Freddie will be missed by so many who knew and loved him. Services were held at 6:30 p.m. Friday, April 12, 2019 in the Memorial Chapel of Richland with Brother Chuck Boren officiating. Recorded music selections included, “Heaven Got Another Angel,” “Go Rest High on That Mountain,” “Letting You Go is Loving You,” “When I Get Where I’m Going,” “The Dance,” and “One More Day.” Serving as escorts were Roger, Danny and Mark Jennings, Brian Smith, Ronnie Walters and Joe Durreman. Private burial was held in the St. John Swede Cemetery. Services were under the care and direction of Memorial Chapel of Richland. Memorial contributions are suggested in memory of Freddie Jennings and may be left at the Memorial Chapel of Richland. Online condolences may be left at www.memorialchapelsandcrematory.com

The family of Freddie Gene Jennings created this Life Tributes page to make it easy to share your memories.

Freddie Gene Jennings, of Swedeborg, Missouri was born on February...