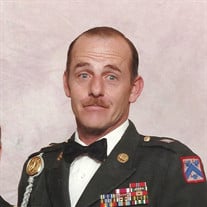 SFC (Ret) Frederick Allen Werley, son of the late Allen Avery and Sadie Geneva (Dorris) Werley, was born October 9, 1953 in Farmington, Missouri. He passed away Saturday, December 19, 2015 in his home near St. Robert having attained the age of 62 years. As a young boy, Frederick was raised in Desloge, Missouri where he attended school and graduated from North County High School with the Class of 1971. Shortly after graduation, Frederick entered the United States Army and served his country faithfully until his retirement in 1994 after 22 years of service. He earned several awards and commendations; some of which include: Bronze Star Medal, Meritorious Service Medal 2nd Award, Army Commendation Medal 4th Award, Good Conduct Medal 7th Award, National Defense Service Medal 2nd Award, Armed Forces Expeditionary Medal, Meritorious Unit Commendation, NCO Professional Development Ribbon w/Numeral 3, Army Service Ribbon, Overseas Service Ribbon 3rd Award, Southwest Asia Service Medal w/Three Bronze Stars, Kuwait Liberation Medal, Sharpshooter Marksmanship Badge Rifle M-16, and Driver and Mechanic Badge. Frederick served in Desert Storm and Desert Shield. While serving in Hawaii, Frederick met the love of his life, Margaret Pohl. They were united in marriage on November 25, 1978 in Ft. Belvoir, Virginia. They shared over 37 years of marriage together and many wonderful memories. After retiring from the military, Frederick began worked at Bass Tracker Marine in Lebanon, Missouri as an assemblyman. He was a life member of the St. Francois County VFW Post 2426 in Desloge, Missouri. In his spare time, he enjoyed playing golf and had a wonderful sense of humor and loved to tease everyone that he knew. Most importantly, he treasured the times spent with family and friends. Frederick will be sadly missed but fondly remembered by all those that knew and loved him. He leaves to cherish his memory, his wife, Margaret of the home; a brother, Elmer Werley (Glenda) of Desloge, MO; four sisters, Martha Moore (Glenn) of Desloge, MO, Ethel Hawkins (Floyd) of St. Clair, MO, Deborah Sansoucie of Lettington, MO, and Lori Hurt (Lawrence) of Ironton, MO; a number of nieces and nephews; a host of half-brothers and half-sisters; and other relatives and friends. In addition to his parents, Frederick was preceded in death by one brother: Robert Werley and several half-brothers and sisters. Services were held at 1:00 p.m. Tuesday, December 22, 2015 in the Memorial Chapels and Crematory of Waynesville / St. Robert with a United States Military Chaplain officiating. The songs “Will the Circle Be Unbroken” and “How Great Thou Art” were played. Burial with military honors followed in the Missouri Veterans Cemetery of Waynesville. Military honors were provided by the United States Army of Fort Leonard Wood, Missouri.

The family of SFC (Ret) Frederick Allen Werley created this Life Tributes page to make it easy to share your memories.