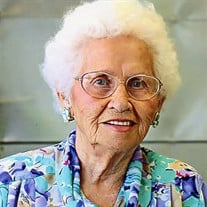 Freida Cleo Helms was the seventh child out of eleven to be born February 15, 1921 to John R. and Dollie (Baker) Robertson, in Crocker, Missouri. “Cleo” as she was known by, grew up and attended school in Richland, Missouri. On November 11, 1935, Cleo accepted Christ while attending a fall revival at First Baptist Church in Richland where she faithfully attended and served throughout most of her life. There she taught Sunday school and helped with organizing church dinners and serving wherever the need. On March 29, 2015 Cleo moved her membership to Grace Baptist Church in Richland and faithfully attended bringing her beautiful smile and gentle hugs to those around her. Cleo dearly loved both church families and they loved her. Cleo married her one and only true love, John Milford Helms on November 24, 1939 in Waynesville, Missouri. God blessed their happy home with five precious children, Sandra, Dennis, Tony, John and Virginia. Cleo took great pride and joy in her home, and raising a happy, healthy family. She was a devoted mother and wife to her beloved family. She opened her heart and home to many and it was always filled with love, hugs and a homemade meal as Cleo loved to cook. She and John shared nearly fifty nine wonderful years together before his passing on January 4, 1998. Due to John’s employment with the Frisco Railroad for thirty five years, the family had to move to Springfield, Newburg and Lebanon; but their heart and home would always be in their hometown community of Richland. Cleo was instrumental in the start-up of the Nutrition Center here in Richland and enjoyed helping her community. She kept herself busy in and out of her home whether working in her yard or tending her vegetable and flower gardens over the years. She was very artistic and talented and loved to quilt and oil paint. Her paintings could be seen throughout her home. She also enjoyed reading her Bible and watching TV however, Cleo’s most treasured times were spent with her family, and friends. On the morning of Monday, August 10, 2017, surrounded by her loving family Cleo, having attained the age of 96 years, 5 months and 23 days, took the hand of her loving Savior she so faithfully served and went home to glory. She leaves behind to cherish her memory her three children: Sandra Kay Beery of Richland, MO, Dennis Wayne (Leah) Helms of Richland, MO and Tony Ray (Christina) Helms of Camdenton, MO; 14 grandchildren: Cindy, Teddy, Lynda, Robin, Irene, John, Tina, Tyler, April, Megan, Grace, Kody, Tony Jr. “T.J.” and John Luke; 26 great grandchildren: 6 great-great grandchildren; several nieces, nephews, and other relatives and friends. Cleo was preceded in death by her parents, her husband John; two children, John Russell Helms and Virginia Mae “Jenny” Johnson, five grandchildren, David Helms, Russell Helms, Carrie Beery, Aaron Helms and Candy Johnson; one great grandson, Collin Mulnik; a daughter-in-law, Betty Helms and son-in-law, Harold Johnson. We rejoice in knowing Cleo is safe in the arms of God and is enjoying a reunion like no other with her beloved family and friends. She will be remembered as a beautiful, classy lady and greatly missed, however, she will forever live on through the treasured memories made in the hearts of those who were privileged to know and love her. Services were held at 11:00 A.M., Monday, August 14, 2017 with Pastor Fred Bobe officiating. Tony Helms shared fond memories of his mother, as well as several other family and friends. Soloist, Virginia Jefferies sang “I Can’t Even Walk.” Soloist and Pianist, Mary Ann Tate sang “In the Garden Medley” and “Just One Rose.” Escorts included Tyler Helms, Russell Hobbs, Jason Lobland, Jack Littlepage, Rod McBreairty and Barry Oursbourn. Honorary escorts were Bobby Baker and Dr. Mike Hawkins. Burial followed in the Oaklawn Cemetery of Richland. Services were under the direction of Memorial Chapel of Richland. Memorial contributions may be made in memory of Cleo Helms to Grace Baptist Church of Richland and may be left at the funeral home. In lieu of flowers, memorials can be made to Grace Baptist Church of Richland in memory of Cleo Helms and may be left at the funeral home. Online condolences may be made at www.memorialchapelsandcrematory.com

Freida Cleo Helms was the seventh child out of eleven to be born February 15, 1921 to John R. and Dollie (Baker) Robertson, in Crocker, Missouri. &#8220;Cleo&#8221; as she was known by, grew up and attended school in Richland, Missouri. On... View Obituary & Service Information

The family of Freida "Cleo" Helms created this Life Tributes page to make it easy to share your memories.

Freida Cleo Helms was the seventh child out of eleven to be born...