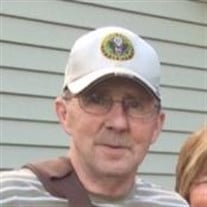 Gary Dean McGhee, son of the late Raymond Wilbur and Marjorie (Kiser) McGhee, was born April 1, 1953 in Jackson, Ohio. As a young boy, Gary grew up in Oak Hill, Ohio and graduated from Jackson High School in Jackson, Ohio. Shortly after graduation, Gary entered into the United States Army and served his country faithfully during the Vietnam Conflict. He was transferred to Germany where he met the love of his life, Petra Schoenfelder. They were united in marriage on March 17, 1978 in Germany. Gary continued in the United States Army until his retirement in 1992. He had attained the rank of Sergeant First Class and earned several awards and commendations; some of which include: National Defense Service Medal-2nd Award, Army Service Ribbon, Overseas Service Ribbon-2nd Award, Noncommissioned Officer Professional Development Ribbon-3rd Award, Driver and Mechanic Badge, Army Achievement Medal-4th Award, Gold Recruiter Badge, Army Good conduct Medal-6th Award, Army Commendation Medal-3rd Award, Meritorious Service Medal and the Sharpshooter Qualification Badge M-16 Rifle. After his retirement, Gary continued serving his country as a civil service employee. He served as a driver for the 35th Engineer Battalion and 31st Engineer Battalion. In his spare time, Gary enjoyed being outdoors while fishing and working in his yard. He loved to watch Westerns on television. Most importantly, he and Petra loved spending time together and her description of Gary is that he was a “loving husband and good provider”. He was also an outstanding friend and was willing to help any of his friends. Gary passed away Monday, March 8, 2021 in his home having attained the age of 67 years. He will be sadly missed, but fondly remembered by all those that knew and loved him. Gary leaves to cherish his memory, his wife: Petra McGhee of the home; three sisters: Ruth Pelfrey (Joe), Brenda Newkirk (Bob), and Donna Coyan (Ronald), all of the state of Ohio; one brother: Mike McGhee (Sybil) of the state of Ohio; other relatives and friends. In addition to his parents, Gary was preceded in death by four brothers: Johnny, Donald, James, and Chuck. Services were held at 12:00 p.m. Friday, March 12, 2021 in the Memorial Chapels and Crematory of Waynesville / St. Robert with Chaplain (MAJ) Joel Britton officiating. The songs “Heart of Gold” by Neil Young and “Go Rest High on that Mountain” by Vince Gill were played. Serving as escorts were family and friends. Burial with military honors followed in the Missouri Veterans Cemetery of Waynesville with military honors being provided by the Missouri Honors Team.

The family of SFC (Ret) Gary Dean McGhee created this Life Tributes page to make it easy to share your memories.