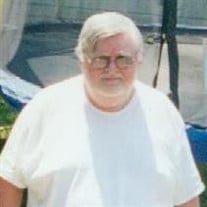 Gary Lee Timmons, son of the late Truman Fredrick Timmons, Sr. and Ellen J. (Bond) Timmons, was born February 24, 1948 in Centralia, Illinois where he grew up and attended school. Gary entered the United States Army and served his country faithfully before transferring to the United States Navy where he continued to serve faithfully. He earned several awards and commendations; some of which include: Vietnam Service Medal w/4 Bronze Service Stars, National Defense Service Medal, Republic of Vietnam Campaign Medal, and Sharpshooter (Rifle). He was medically retired in 1979. During his time in the military, Gary finished his education and earned his GED. After his honorable discharge from the military, Gary did odd jobs, but mostly worked at Big Chief Truck Plaza in Mt. Vernon, Illinois before moving to the Waynesville area in 2001. On June 28, 1970 in Mt. Vernon, Illinois, Gary was united in marriage to Vivian Karen Donoho. They shared over 45 years together and were blessed with three sons: Fredrick, Brian and David. In his spare time, Gary enjoyed watching TV and coloring “fuzzy posters”. He was the life of the party and loved spending time with his family and friends. Gary passed away Wednesday, March 9, 2016 in the Missouri Veterans Home of St. James, Missouri having attained the age of 68 years. He will be sadly missed but fondly remembered by all those that knew and loved him. Gary leaves to cherish his memory, his wife: Vivian Timmons of St. James, MO; three sons: Frederick Timmons (Tammy) of Union, MO, Brian Timmons (Kristi) of Irvington, IL and David Timmons of St. Robert, MO; three siblings: Truman Fredrick Timmons, Jr. of Sullivan, MO, Sharon Crader of Marble Hill, MO and Mark Timmons of Centralia, IL; fourteen grandchildren; two great grandchildren; other relatives and friends. Services were held at 10:00 a.m. Monday, March 14, 2016 in the Memorial Chapels and Crematory of Waynesville / St. Robert with Rev. Chris Hendrix officiating. The songs “American Soldier” by Toby Keith, “Cats in the Cradle” by Ugly Kid Joe and “Something to Believe In” by Poison were played. Serving as escorts were the United States Army. Burial with military honors followed in the Missouri Veterans Cemetery of Waynesville with military honors provided by the United States Army and United States Navy. Memorial contributions may be made in memory of Gary Timmons and may be left at the funeral home.

The family of Gary Lee Timmons created this Life Tributes page to make it easy to share your memories.