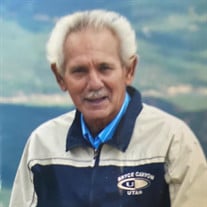 Gene George Walsh, son of the late Arvill Edward Walsh and Mary Virginia (Guentz) Walsh, was born June 6, 1946 in St. Louis, Missouri. As a young boy, Gene grew up and attended school in Kirkwood, Missouri. Gene left high school and entered the United States Army and served with the 25th Infantry during the Vietnam War. He had attained the rank of Specialist 4 and earned the National Defense Service Medal, Vietnam Service Medal, Vietnam Campaign Medal, Marksman Badge with Rifle Bar, and the Infantryman Badge. After being honorably discharged from the military, Gene worked for the Rockwood School District in the maintenance department for several years. In his spare time, Gene was a fun loving, adventure seeking man. He enjoyed traveling, spending time on the water (in any way shape or form), listening to music, photography, and automobile racing. Gene passed away Friday, September 17, 2021 in Pulaski County, Missouri doing one of the things he loved, being on the water. He had attained the age of seventy-five years. He will be sadly missed, but fondly remembered by all those that knew and loved him. Gene leaves to cherish his memory, his sister: Mary Halfmann (Frank) of Arnold, MO; two brothers: Patrick Walsh (Sharon) of Fenton, MO and Don Walsh (Rosie) of Webster Grove, MO; girlfriend: Barbara McCanless of Leasburg, MO; nieces, nephews, other relatives, and friends. Inurnment services with military honors will be held at 12:30 p.m. Friday, October 1, 2021 in the Jefferson Barracks National Cemetery. Arrangements are under the direction of Memorial Chapels and Crematory of Waynesville / St. Robert.

The family of Gene George Walsh created this Life Tributes page to make it easy to share your memories.