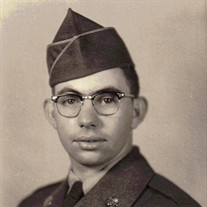 MSG (Ret) George Oscar Asbury, son of the late Robert Samuel and Hester Marie Allen) Asbury, was born March 12, 1935 in Tazewell, Virginia. He passed away Wednesday, August 12, 2015 in the Landmark Hospital of Columbia, Missouri having attained the age of 80 years. George grew up in Tazewell, Virginia and graduated from Tazewell High School. Shortly after graduation, George moved to Detroit, Michigan and began working in the auto industry. George entered the United States Army and did his basic training at Fort Leonard Wood. He served his country faithfully until his retirement in 1979. He had attained the rank of Master Sergeant and earned several awards and commendations; some of which include: National Defense Service Medal, Vietnam Service Medal, Republic of Vietnam Campaign Medal, Army Commendation Medal (1st Oak Leaf Cluster), Bronze Star Medal (1st Oak Leaf Cluster), Overseas Bars (2), Good Conduct Medal (7th Award), Vietnam Cross of Gallantry, Expert Badge (M-16), and the Expert Badge (.45 cal). While being stationed in Germany, George met the love of his life, Christa Gabriele Wagenblast. They were united in marriage on June 3, 1970 in Stuttgart, Germany. They came to the United States to meet Mr. and Mrs. Asbury while on their honeymoon and George was immediately sent to Vietnam. After retiring from the military, George worked as a civil service employee in Logistics (tank and automotive command). He had previously taught how to work on tanks and big trucks. He retired from civil service in 2002. After retiring, George was able to do more of what he enjoyed. He loved to work in his garden and was an avid St. Louis Cardinal baseball fan. He enjoyed watching the games every chance he could. He was also a member of the Disabled American Veterans, Dixon Masonic Lodge and the Shriner’s in El Paso, Texas. Most importantly, he loved spending time with his friends and especially his family. George will be sadly missed, but fondly remembered by his wife, Christa Asbury of the home; one daughter: Brita Marie Asbury of Dixon, MO; one brother-in-law: James “Robert” Harman of Tazewell, VA; other relatives and friends. In addition to his parents, George was preceded in death by two sisters: Mildred Harman and Rita Skyes and one infant brother, Fred. Graveside services with military honors were held at 2:00 p.m. Wednesday, August 19, 2015 in the Missouri Veterans Cemetery of Waynesville with Chaplain (MAJ) Ken Bolin officiating. Military honors were provided by the United States Army of Fort Leonard Wood, Missouri. Services were under the direction of Memorial Chapels and Crematory of Waynesville / St. Robert. Memorial contributions may be made in memory of George Asbury to the Harry Herron DAV Chapter 49 or the No-Kill Animal Shelter and may be left at Memorial Chapels and Crematory of Waynesville / St. Robert.

The family of MSG (Ret) George Oscar Asbury created this Life Tributes page to make it easy to share your memories.