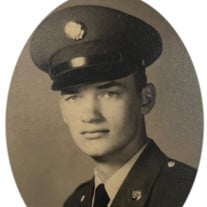 George Edward Felts, son of the late Loren and Louetta (McQuaid) Felts, was born March 26, 1943 in DuQuoin, Illinois where he grew up and attended school. As a young man, George entered the United States Army and served his country faithfully in Vietnam until his medical retirement. He had earned the rank of Staff Sergeant and earned several awards and commendations; some of which include: Army Commendation Medal, Bronze Star Medal, Vietnam Service Medal w/1 Silver Service Star and 2 Bronze Service Stars, Vietnam Campaign Medal w/60 Device, Good Conduct Medal w/2 Loops, 5 Overseas Bars, Expert Badge w/Rifle Bars (M-16) & (M-14). After being discharged from the military, George lived in Southwest Missouri for most of his life except for a short time in Texas. In 2002, George moved near Lebanon, Missouri. While living in Texas, George worked in the oil industry in Beaumont, Texas and while in Missouri, he worked for Lindsay Chevrolet in Lebanon for many years. In his spare time, George loved to be outdoors. You could find him either hunting, fishing, trap shooting or going to the lake. George passed away Sunday, April 21, 2019 in his home having attained the age of 76 years. He will be sadly missed, but fondly remembered by all those who knew and loved him. George leaves to cherish his memory, his life partner: Eva Taber of Lebanon, MO; three children: Stacey, Chad and Loren; one brother; other relatives and friends. Funeral services were held at 1:00 p.m. Friday, April 26, 2019 in the Memorial Chapels and Crematory of Waynesville / St. Robert with Chaplain (MAJ) Joshua A. Metz officiating. Soloist / Pianist Becky Link sang "Where the Roses Never Fade" and "His Eye is on the Sparrow". Family and friends served as escorts. Burial with the military honors followed in the Missouri Veterans Cemetery of Waynesville. Military honors were provided by the Missouri Honors Team.

George Edward Felts, son of the late Loren and Louetta (McQuaid) Felts, was born March 26, 1943 in DuQuoin, Illinois where he grew up and attended school. As a young man, George entered the United States Army and served his country faithfully... View Obituary & Service Information

The family of George Edward Felts created this Life Tributes page to make it easy to share your memories.