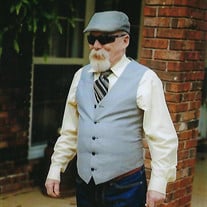 George Louis “Pete” Gallaher, Jr., son of the late George Louis Gallaher, Sr. and Daphne (Mosley) Gallaher, was born June 25, 1951 in East St. Louis, Illinois. As a young boy, Pete grew up in Collinsville, Illinois and graduated from Collinsville High School. Shortly after graduation, Pete entered the United States Army and served his country faithfully until his retirement in 1990 after 21 years of service. He retired at Ft. Bragg, North Carolina and earned several awards and commendations. He had attained the rank of Sergeant First Class and was a combat engineer. During his time in the military, Pete was stationed for a time at Fort Leonard Wood, Missouri. It was during that time, that he met a young lady by the name of Robin Susan Payton. They were united in marriage on January 19, 1981 in Waynesville, Missouri. They shared over 40 years of marriage together and were blessed with five children: Patrick, Shannon, Caitlin, Nicole, and Derek. Pete and the family decided to return to the Fort Leonard Wood area after his retirement from the military. They made their home here and raised their children. After his retirement, Pete continued serving as an employee at the General Leonard Wood Army Community Hospital on Fort Leonard Wood for several years. While still living in Collinsville, Pete was the director of the Kahok Dancers and was also a member of the VFW and American Legion, both in Collinsville. In his spare time, Pete enjoyed watching westerns and military movies, doing beadwork and leatherwork. Most importantly, he loved spending time with his family, especially the grandchildren. Pete passed away Tuesday, May 11, 2021 in his home having attained the age of 69 years. He will be sadly missed, but fondly remembered by all those that knew and loved him. He leaves to cherish his memory, his wife: Robin of the home; four children: Patrick J. Gallaher (Heather) of Jay, NY, Shannon Payton of Waynesville, MO, Caitlin Gallaher of Waynesville, MO, and Nicole Petty (Joshua, Sr.) of Richland, MO; four grandchildren: Maggie Ray Payton, Brody Gallaher, Charlotte Payton, and Joshua Petty, Jr.; three brothers: Jeffery Gallaher (RaeAnne) of Indianapolis, IN, Scott Lewis of St. Robert, MO, and Larry Morton of Madison, AL; several nieces, nephews, other relatives and friends. In addition to his parents, Pete was preceded in death by one son: Derek Gallaher; and two sisters: Terry Bruner and Deborah Pereira. Funeral services with military honors were held at 5:30 p.m. Thursday, May 13, 2021 in the Memorial Chapels and Crematory of Waynesville / St. Robert. Memorial contributions may be made in memory of Pete Gallaher and may be left at Memorial Chapels and Crematory of Waynesville / St. Robert.

The family of SFC (Ret) George Louis "Pete" Gallaher Jr. created this Life Tributes page to make it easy to share your memories.