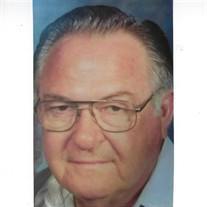 George Ray Gray, son of the late Ira Gray and Nettie Gray, was born on November 29, 1932 in New Underwood, South Dakota. At an early age, George and his family moved from South Dakota to Plato, Missouri and later relocated to Richland, Missouri where he graduated from Richland High School. After graduation, George worked as a barber and then joined the United States Army. He served for two years before being honorably discharged. On October 6, 1978, George was united in marriage to Geraldine Miller in Camdenton, Missouri. They shared over 42 years of marriage together. After leaving the Army, George began as an over the road truck driver which he did for many years along with Geraldine by his side. He drove a dump truck for several years and also drove for Enterprise. George was a hard worker and always provided for his family’s needs. In his earlier years, George was a member of the Eldon Christian Church where he served as deacon. He was also a member of the Pleasant Hope Masonic Lodge #467 AF & AM. For most of their married life, George and Geraldine lived in Springfield. In their later years, they sold their home in Springfield and were “snowbirds” traveling to south Texas for the winter. They sold their mobile home and moved into a house in Springfield after their health started to decline. George spent the last couple of years at Glendale Manor in Springfield. One of his grandkids said this about George. ”They (George and Geraldine) still acted like two teenagers in love. The memories that flood back today…the fun times we had climbing up in the semi-truck they drove all over the country, hiding with a gorilla mask to jump out and scare us to death, the smell of his pipe and aftershave, the funny things he would say when you least expected it and so many more. So thankful for all these memories we made over the years.” George was liked and loved by all. George passed away Sunday, December 6, 2020 in the Cox South Hospital of Springfield, Missouri having attained the age of 88 years. George leaves to cherish his memory, his wife: Geraldine Gray of the home; his children: Virginia Gray of Colorado Springs, CO, Patsy Johnson of Jerald, MO, James Massey and wife, Kathy, of St. Louis, MO, Dean Gray of Denver, CO, Pat Hart of Springfield, MO, Sharon Bowers and husband Rockie of Lancaster, SC, Jim Miller and wife, Renee, of Joplin, MO and Randy Miller and wife, Gloria, of Haysville, KS; son-in-law: Jeff Davis of Springfield, MO; daughter-in-law: Shelia Miller of Springfield, MO; many grandkids, great grandkids, nieces, and nephews. In addition to his parents, George was preceded in death by two sisters: Nettie Pearl Fuentus of Albuquerque, New Mexico and Irene Jennings of Lebanon, Missouri; and two children: Bob Miller and Janet Davis. Funeral services will be held at 1:00 p.m. Monday, December 14, 2020 in the Memorial Chapels and Crematory of Waynesville / St. Robert. Burial will follow in the Waynesville Memorial Park Cemetery of Waynesville, MO. Visitation will be held from 12:00 p.m. until time of service at 1:00 p.m. Monday, December 14, 2020 in the Memorial Chapels and Crematory of Waynesville / St. Robert. The family is asking that those who attend the service and visitation, to please wear a face mask and practice social distancing. Memorial contributions may be made in memory of George Gray and may be left at Memorial Chapels and Crematory of Waynesville / St. Robert.

George Ray Gray, son of the late Ira Gray and Nettie Gray, was born on November 29, 1932 in New Underwood, South Dakota. At an early age, George and his family moved from South Dakota to Plato, Missouri and later relocated to Richland,... View Obituary & Service Information

The family of George Ray Gray created this Life Tributes page to make it easy to share your memories.

George Ray Gray, son of the late Ira Gray and Nettie Gray, was...