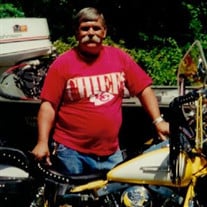 George Rollin Kelly was born February 11, 1953 in Waynesville, Missouri to George and Mildred Kelly. He grew up in St. Robert, Missouri with his ten siblings: Leo, Michael, Eddie, Sandy, Richard, Francine, Larry, Nita, Wayne and Billy. George met his wife Vickie while she was working at the Woodlane Drive-In in St. Robert. They were united in marriage March 26, 1975 in St. Robert. Together they had three children: George, Eve and Cindy. George worked for the City of St. Robert for 36 years, retiring in February 2016. In his free time, George enjoyed spending time with his wife, children and ten grandchildren: Travis, Elizabeth, Zoe, Taylor, Caleb, Riley, Jayden, Ashton, Havana, and George IV. His family was the most important thing to him, and he made sure they knew every day how much he loved them. He also spent time working on lawn mowers and doing yard work with his wife Vickie. He made sure that Sunday was always the day all the children and grandchildren came home for dinner. George is survived by his wife, Vickie; son: George (Laura), daughter: Eve (Jeremiah); daughter Cindy (Steven); sisters: Nita and Francine; brother: Wayne, Richard and Larry; his ten grandchildren; and many nieces and nephews. He was preceded in death by his dad: George; mom: Mildred; sister: Sandy; and four brothers: Leo, Michael, Eddie and Billy. George’s family will be hosting a Celebration of Life for George on Saturday, October 22, 2016 at his home starting at 2:00 p.m. We are inviting all he knew and loved him to join our family to celebrate George’s life. Arrangements are under the direction of Memorial Chapels and Crematory of Waynesville / St. Robert.

The family of George Rollin Kelly created this Life Tributes page to make it easy to share your memories.