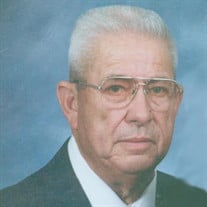 George Albert Mayor, the first son of the late George and Mattie Marie (Zeigenbein) Mayor, was born in St. Louis, Missouri on December 9, 1926. The family later moved to Waynesville, Missouri where he graduated from Waynesville High School in May 1945. On May 31, 1945, George entered the United States Army and served during World War II in Europe with Company B, 504th Military Police Battalion. He was honorably discharged on November 16, 1946. On March 19, 1949, George was united in marriage to Margaret Marie Gamber. They shared 52 years of marriage together before she preceded in death on March 1, 2001. They were blessed with one daughter: Janis. Janis preceded him in death on June 17, 2004. On April 20, 2002, George married Anna Jean Hendershot, who was a longtime neighbor and friend. Anna Jean preceded him in death on June 1, 2013 after 11 years of marriage. During George’s working years, he spent most of his life working in construction as a carpenter. He also worked many years for Oakwood Oil Company, owned by Paul Shultz. George had made a profession of faith and was a longtime member of the Church of God in St. Robert, Missouri. George went home to be with his Lord on Tuesday, November 24, 2020 in the Missouri Veteran’s Home of Warrensburg, Missouri having attained the age of 93 years. He will be sadly missed, but fondly remembered by all those that knew and loved him. George leaves to cherish his memory, his cousin/caregiver: Bill Mayor and his wife Iris of Lee’s Summit, MO; several nieces, nephews, cousins, other relatives, and friends. In addition to his parents, both wives, and daughter, George was preceded in death by two brothers: Louis and Clifford Mayor; and one sister: Margaret Proctor. Graveside services with military honors were held at 11:00 a.m. Saturday, November 28, 2020 in the Waynesville Memorial Park Cemetery of Waynesville with Pastor Richard Breeden officiating. Serving as escorts were family and friends. Military honors were provided by the Missouri Honors Team. Services were under the direction of Memorial Chapels and Crematory of Waynesville / St. Robert.

The family of George Albert Mayor created this Life Tributes page to make it easy to share your memories.

George Albert Mayor, the first son of the late George and Mattie...