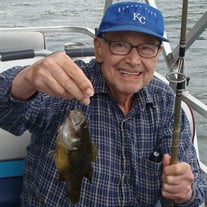 George Walter Sprague, son of the late Ralph and Adeline (Valentine) Sprague, was born August 12, 1920 in Chicago, Illinois. He passed away Friday, August 21, 2015 in the Lake Regional Hospital of Osage Beach, Missouri having attained the age of 95 years. At an early age, George’s parents passed away and he was raised by his Aunt Annie in Prairie View, Kansas where he attended school and graduated from high school. After graduating from high school, George attended college for several years and then entered the United States Army Air Corp where he served as a B24 tail gunner. He served in Normandy, Northern France, Rhineland and Europe and had attained the rank of Tech Sergeant. George earned the Good Conduct Air Medal w/2 Clusters, 1 Overseas Bar and the Europe-Africa-Middle Eastern Campaign Medal 2/4 Bronze Stars. After his honorable discharge from the Air Corp, George attended KU University for a couple of years and then was employed by Boeing Aircraft as a Quality Assurance Inspector. He was transferred to their Seattle, Washington facility and while there, he met the love of his life, Elsie Elaine Walker. They were united in marriage on February 10, 1961 and they shared over 53 years of marriage together. They were blessed with five children: Lynn, Jack, Jim, Anna and Tom. Elsie preceded him in death on September 5, 2014. In his spare time, George enjoyed woodworking projects. He also liked to be outdoors while fishing and working in the garden. He loved to watch any kind of sport. Most importantly, he treasured spending time with his family. George had made a profession of faith early in life and attended Cornerstone Baptist Church in Richland when he was able. George will be sadly missed, but fondly remembered by all those that knew and loved him. He leaves to cherish his memory, his five children; Lynn May of El Dorado, KS, Jack Sprague (Laura) of Boise, ID, Jim Sprague (Cheryl) of Richland, MO, Anna Jones (David) of Flower Mound, TX and Tom Sprague (Ruth) of El Dorado, KS; twenty-one grandchildren; thirty-three great-grandchildren; a great-great-grandson; as well as a host of other relatives and friends. In addition to his parents and wife, George was preceded in death by one sister, Dorothy. Funeral services were held at 10:00 a.m. Friday, August 28, 2015 in the Memorial Chapel of Waynesville with Minister Stephen Sprague officiating. David Jones sang “No Eye Hath Seen It” and “Jesus Paid it All”, Lynn May sang “The Old Rugged Cross” and James Caudle sang “I’ll Fly Away”. Serving as escorts were Jim Sprague, Tom Sprague, Andrew Sprague, Daniel Sprague, Stephen Sprague, Jack Sprague, Ben Jones, Dillon Casto and Jeff Casto. Burial followed in the Missouri Veterans Cemetery of Waynesville, Missouri. Memorial contributions may be made in memory of George Sprague and may be left at the funeral home.

George Walter Sprague, son of the late Ralph and Adeline (Valentine) Sprague, was born August 12, 1920 in Chicago, Illinois. He passed away Friday, August 21, 2015 in the Lake Regional Hospital of Osage Beach, Missouri having attained the age... View Obituary & Service Information

The family of George Walter Sprague created this Life Tributes page to make it easy to share your memories.