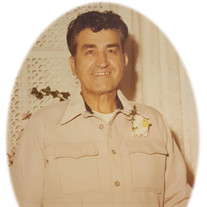 SSG (Ret) George Vozniak, son of the late Frank and Sophia (Pincinski) Vozniak, was born May 18, 1926 in Kato, Pennsylvania. George grew up in Snowshoe, Pennsylvania where his parents were coal miners and farmers. At the age of 16, George entered the United States Navy. He was honorably discharged at the age of 18 and six days after his discharge, he entered the United States Army where he served for 29 years, 4 months and 24 days. He served as an engineer in the Army and earned several awards and commendations for his faithful service. He had attained the rank of Staff Sergeant and retired in 1972 from active duty. On August 9, 1978, George was united in marriage to Virginia Ruth Enloe in Las Vegas, Nevada. They shared over 38 years of marriage together and many wonderful memories. After retiring from the military, George began working for Tombs & Sons and EDP at Fort Leonard Wood and completely retired in 1995. In his spare time, George enjoyed being outdoors while fishing (especially bass fishing), hiking and just being out in nature. He also liked to watch any type of sports. He was a member of the Veterans of Foreign Wars. George passed away Monday, February 20, 2017 in the Phelps County Regional Medical Center of Rolla, Missouri having attained the age of 90 years. He will be sadly missed, but fondly remembered by all those that knew and loved him. George leaves to cherish his memory, his wife: Virginia Vozniak of the home; two sons: G-Kip Vozniak of the state of Florida and Clayton Vozniak of Alexandria, VA; one daughter: Shirley McKinnon (Dwight) of Dixon, MO; four grandchildren: Frankie Vozniak, Andrea Ling, Cheyenne Alexander and Rachelle Thessen; seven great grandchildren; several other relatives and friends. In addition to his parents, George was preceded in death by five siblings: Alex, Paul, Charles, Nick and Ann. Graveside services with military honors were held at 11:00 a.m. Thursday, February 23, 2017 in the Waynesville Memorial Park Cemetery of Waynesville with Chaplain Keith Ferrell officiating. Military honors were provided by the United States Army of Fort Leonard Wood, Missouri. Services were under the direction of Memorial Chapels and Crematory of Waynesville / St. Robert. Memorial contributions may be made in memory of George Vozniak and may be left at the funeral home.

SSG (Ret) George Vozniak, son of the late Frank and Sophia (Pincinski) Vozniak, was born May 18, 1926 in Kato, Pennsylvania. George grew up in Snowshoe, Pennsylvania where his parents were coal miners and farmers. At the age of 16, George... View Obituary & Service Information

The family of SSG (Ret) George Vozniak created this Life Tributes page to make it easy to share your memories.