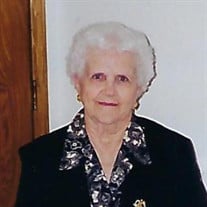 Georgia Loraine Dye Primus was born March 17, 1921, number 8 of 11 children to Harvey F. Dye (Whis) and Stella Helton Dye at Hanna, MO. On September 1, 1951, Georgia was united in marriage to Clyde Primus. He preceded her in death in 1983. Together Georgia and Clyde raised daughter Diann as they traveled the world compliments of the United States Army with the last and final post being in California. Their beloved daughter Diann married Robert Michael George in September 1972. Georgia’s favorite grandson Christopher Michael was born in 1976. Georgia professed her faith in Jesus Christ at the age of 17 and united with the Friendship Church in Bloodland, Missouri. Over the years, Georgia, who could not read a note of music, enjoyed her life enriched in Christ through being a pianist, organist and singing with the church quartets and choirs and served in many other positions in various churches. Her education started at the age of 5 at the Cave Springs School in Hanna, Missouri where she attended 1st through 8th grade. She graduated from Waynesville High School in 1939. Georgia had a record of 14 years of perfect attendance in school. She attended Missouri State University, Missouri Science and Technology University of Rolla, Northridge College of San Fernando Valley California, University of Alaska, University of Kansas, and University of Missouri. She held lifetime teaching certificates in Missouri, Kansas, Alaska, and California. Georgia taught school 50 years, and when combined with other family members that totals well over 200 years. Yes, teachers they were. Georgia taught in the days of country one room schoolhouses, with open water buckets, the old Jumbo wood stoves, outhouses, oiled floors, worn-out blackboards, and the aroma of peanut butter and egg sandwiches drifting from the lunch pails on the back shelf. She started at Shady Grove in Rural Pulaski County, then on to Cave Springs, Brownfield, Pleasant Hope, Deerlick, Waynesville, Alaska, Germany, Kansas, and California. Georgia was proud of her professional awards. Her biography appeared in the 1973 Who’s Who Women in America, Outstanding Teachers of America in 1973, Apple Award for Outstanding Teacher of Los Angeles, California in 1970 and 1972, and many other well deserved mastery teaching awards. Georgia said her greatest experience in her lifetime was with daughter Diann visiting the Holy Land in December of 1964; singing Christmas Carols on Shepherds Hill in Bethlehem on Christmas Eve, visiting the tomb where Jesus laid, the upper room of the Lord’s supper, and the Hill of the Skull where Jesus was crucified. Georgia went home to be with her Lord Saturday, October 16, 2021, in the Life Care Center of Waynesville having attained the age of 100 years. She is survived by son-in-law: Robert Michael George and her favorite grandson, Christopher Michael George of Waynesville; a host of nieces, nephews and many, many friends. She is preceded in death by her father and mother; husband: Clyde Primus; daughter: Diann George; siblings: Elsie Bailey, Mary, Charley, and Virgie Dye, Frieda Graves, Clara Mae Black, Roy Lee, Harvey, and Chester Dye. Memorial contributions may be made in memory of Georgia Primus to the Deerlick Cemetery Fund and may be left at Memorial Chapels and Crematory of Waynesville / St. Robert.

Georgia Loraine Dye Primus was born March 17, 1921, number 8 of 11 children to Harvey F. Dye (Whis) and Stella Helton Dye at Hanna, MO. On September 1, 1951, Georgia was united in marriage to Clyde Primus. He preceded her in death in 1983.... View Obituary & Service Information

The family of Georgia Loraine (Dye) Primus created this Life Tributes page to make it easy to share your memories.