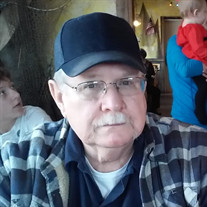 Gerald “Jerry” Wayne Miller, son of the late George W. Miller and Winifred V. (McKinney) Miller, was born December 9, 1945, in Hooker, Missouri. On April 27, 1968, Jerry married the love of his life, Lucy Livona (Wilson) Miller, where together they shared 49 years of blissful marriage and had two beautiful boys: Robert (Bobby) Wayne Miller and David Walter Miller. In 1963, Jerry enlisted in the United States Army and served his country for Nine (9) years two (2) months and twenty (20) days on active duty and for an additional eleven (11) years in the Army Reserves. In 1968, Jerry committed the ultimate act of bravery when he took an assignment as a door gunner on an armed UH-1C (“Huey”) during the Vietnam War. Jerry received a Vietnam Service Medal, Vietnam Campaign Medal, Good Conduct Medal, The Air Medal and Bronze Star Medal with “V” for his heroic actions and dedication while serving his country. Jerry retried from the United States Army in 1992 having attained the rank of Staff Sergeant. Upon returning home to Missouri, Jerry worked as an ammunition supply clerk on Fort Leonard Wood, a supply clerk at General Leonard Wood Army Community Hospital (GLWACH), Marathon Electric in Lebanon, Missouri and as a door greater for Wal-Mart in St. Robert, Missouri before retiring in 2006. After he retired, Jerry was able to devote more time to his favorite hobby – researching, collecting and categorizing his military crests and patches. Jerry enjoyed motorcycle road trips with his family and friends, family gatherings and reminiscing about the “good ole days”. Jerry, although ornery at times, especially loved spending time and creating beautiful memories with his wife and family. Together he and Lucy watched their boys grow into the men they have become and watched their grandsons grow into young adults. Jerry also enjoyed his Sunday breakfast at Smitty’s restaurant with his brother, Billy, his sister, Dixie, and the Missouri State Highway Patrolmen that were on duty that morning. He and Billy loved giving the waitresses, Anita Miller and Lisa Parrish, a hard time. They also managed to tag team and pick on their big sister, Dixie. Their Sunday breakfast was full of laughter and talks about the “good ole days” and current events. Jerry also loved his steak. He always looked forward to family BBQs because he knew he was eating steak and Archie would grill it to perfection. Jerry was called to Heaven on Thursday, July 6, 2017, at Mercy Hospital in Springfield, Missouri. He was surrounded by his loved ones. He attained the age of 71 years, 6 months and 27 days. Jerry was greatly loved and will be forever remembered by his wife, Lucy of the home; his two boys: Robert “Bobby” Miller of Laquey, Missouri and David Miller and his wife, Sherri, of Laquey, Missouri; two grandsons: Tyler Sloan and David “Archie” Miller; one sister, Dixie Banks of St. Robert, Missouri; one brother, William “Billy” Miller and his wife, Jennie, of Waynesville; his mother-in-law, Mabel Wilson, of Laquey, Missouri; his brother-in-law, Marion Wilson and his wife, Juanita, of Duke, Missouri and his sister-in-law, Bonnie “Kaye” Wilson of Richland, Missouri; several nieces and nephews and other relatives and friends. Jerry loved his daughter-in-law (Sherri Miller) as if she was his own daughter. In addition to his parents, Jerry was preceded in death by one brother, James “Jimmy” Miller, one sister, Mary Clarkson and one brother-in-law, Don Banks. Services were held at 10:00 a.m. Wednesday, July 12, 2017 in the Memorial Chapels and Crematory of Waynesville / St. Robert with Chaplain Daryl Densford officiating. The songs “One More Day”, “Daddy I Love You” and “Go Rest High on that Mountain” were played. Serving as escorts were Bobby Miller, David Miller, Tyler Sloan, Archie Miller, George Miller and Orin Miller. Serving as honorary escorts were Billy Miller and Marion Wilson. Burial with military honors followed in the Goodall Cemetery near Newburg, Missouri. Military honors were provided by the United States Army of Fort Leonard Wood, Missouri. Memorial contributions may be made in memory of Jerry Miller and may be left at the funeral home.

The family of SSG (Ret) Gerald "Jerry" Wayne Miller created this Life Tributes page to make it easy to share your memories.