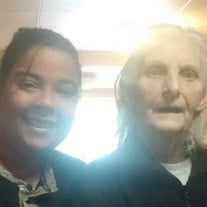 Gerda Clevenger was born June 11, 1939 in Augsburg, Germany where she grew up and attended school. In 1969, Gerda was united in marriage to Lowell Dean Clevenger, Sr., a United States soldier who was stationed in Germany. They shared several years together and were blessed with three children: Lowell Dean, Jr., Phyllis Gean Lucille and John David. In 1971, Gerda came to the United States and in 1974, she and the family were transferred to Fort Leonard Wood, Missouri where they remained the rest of her days. For a short time, Gerda worked as at the commissary (1971-1973) and helped people if they needed their house cleaned (1991-2007). But most importantly, she was a housewife and mother and took great pride in helping to provide for them. In her spare time, Gerda enjoyed playing bingo, feeding the birds, cooking and crocheting and was known for having a “green thumb” when it came to growing plants and flowers. She was an all-around good woman and friend to a lot of people. She will be sorely missed by all those that knew and loved her. Gerda passed away Tuesday, June 27, 2017 in the Sunset Village of the Ozarks of St. Robert, Missouri having attained the age of 78 years. Gerda leaves to cherish her memory, her three children: Lowell Dean Clevenger Jr, of St. Robert, MO, Phyllis Gean Clevenger of Plato, MO and John David Clevenger of Middletown IN.; six grandchildren, two great-grandchildren, as well as several other children that considered her “mom” and other relatives and friends. Gerda was preceded in death by her parents and her husband. Services were held at 11:00 a.m. Tuesday, July 11, 2017 in the Memorial Chapels and Crematory of Waynesville / St. Robert with Pastor Chris Hendrix officiating. The songs “Threaten Me With Heaven”, “Kiss From a Rose”, “Amazing Grace” and “Go Rest High on that Mountain” were played. Memorial contributions may be made in memory of Gerda Clevenger and may be left at the funeral home.

Gerda Clevenger was born June 11, 1939 in Augsburg, Germany where she grew up and attended school. In 1969, Gerda was united in marriage to Lowell Dean Clevenger, Sr., a United States soldier who was stationed in Germany. They shared... View Obituary & Service Information

The family of Gerda Clevenger created this Life Tributes page to make it easy to share your memories.