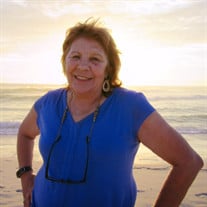 Gerlinde Maria Schivley, daughter of the late Ernst and Maria Magdalena (Hörst) Rudy, was born October 26, 1949 in Sinsheim, Germany. She grew up and attended school in Steinsfurt, a small town in Germany. After graduating from high school, Gerlinde went to business school and was an executive assistant for many years. During this time, she met a young United States soldier by the name of Warren Robert Schivley and they were united in marriage on March 22, 1974 in Plankstadt, Germany. They share over forty-four years of marriage together and were blessed with one daughter, Tanya. After moving to the United States, Gerlinde began working for AAFES and retired after twenty-seven years of faithful service. Gerlinde loved tending to the earth and she was able to create beautiful flower gardens. Her favorite activity was spending time with her husband and the rest of her family. She looked forward to all the visits and traveling together. She also enjoyed spending time with her fur-baby, Betsy. In her spare time, Gerlinde was a member of the Planters of Pulaski County Garden Club and the AAFES Retiree lunch bunch. Gerlinde passed away Wednesday, January 23, 2019 in the Phelps County Regional Medical Center of Rolla, Missouri having attained the age of sixty-nine years. She will be sadly missed, but fondly remembered by all those who knew and loved her. Gerlinde leaves to cherish her memory, her husband: Warren Schivley of the home; one daughter: Tanya Hatley (Keith) of Enterprise, AL; two granddaughters: Cori Austell (Michael) of Odenville, AL and Mackenzie Hatley of Panama City Beach, FL; two siblings: Maria Weimer (Thomas) and Egbert Rudy (Maria), all of Germany; brother-in-law: Mark Schivley (Karen) of Eastchester, NY; several nieces, nephews, other relatives and friends. Funeral services were held at 1:00 p.m. Friday, February 1, 2019 in the Memorial Chapels and Crematory of Waynesville / St. Robert with Chaplain (CPT) Joseph McCall officiating. The songs “Heart of Gold”, “Gonna Miss You”, “Somewhere Over the Rainbow” and “Amazing Grace” were played. Serving as escorts were Keith Hatley, Michael Austell, Ryan Jones, Mark Schivley, Bill Austell and Mark Austell. Burial followed in the Missouri Veterans Cemetery of Waynesville. Memorial contributions may be made in memory of Gerlinde Schivley to the Delbert Day Cancer Center and may be left at the funeral home.

Gerlinde Maria Schivley, daughter of the late Ernst and Maria Magdalena (Hörst) Rudy, was born October 26, 1949 in Sinsheim, Germany. She grew up and attended school in Steinsfurt, a small town in Germany. After graduating from high... View Obituary & Service Information

The family of Gerlinde Maria Schivley created this Life Tributes page to make it easy to share your memories.

Gerlinde Maria Schivley, daughter of the late Ernst and Maria...