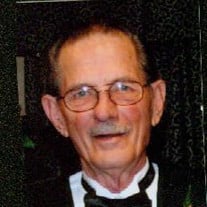 Gilbert Rudolf Rosipal, one of thirteen children born to the union of late Joseph and Agnes Marie (Mokry) Rosipal, was born April 17, 1931 in Granger, Texas. He passed away Thursday, October 27, 2016 in his home (castle) having attained the age of 85 years, 6 months and 10 days. As a young boy, Gil grew up in and around Granger, Texas. He was baptized into the Catholic Faith, as a child, which he believed sustained him and his family throughout his life. He was drafted into the United States Air Force and served his country faithfully for a total of four years. That is where he gained his love for sheet metal, working on aircraft. While stationed at Smokey Hill Air Force Base he met the love of his life, Jo Ann F. Loseman. They married November 12, 1955 and shared over 60 years of love together. Born through this love were eight children: Janet, Joseph, Gail, Gilbert, Charli, Gina, John, and Jeffrey. Shortly before Gil and JoAnn were married, he was honorably discharged from the Air Force and began working for Globe Sheet Metal and Air Conditioning. In 1963, Gil and the family moved to Waynesville to supervise “the Heating and Air Conditioning” at the original General Leonard Wood Army Community Hospital. He started his own business “Waynesville Sheet Metal” later to be “Gil’s Heating and Air Conditioning” in 1967. Gil prided himself in his sheet metal talents and could make things no one else could. He made several specialty items including the tin man on his business sign. He reluctantly closed his business in 2012. Even then when he would be called for a service question, he was happy to give his expert advice to anyone that asked. Gil was also very proud of his Czech heritage and loved listening to Czech music. He was known for making some of the best Czech “klobasa.” His family was always his number one priority as he passed down his love of his heritage to his children and grandchildren. His faith was very important to him and he was very proud to be a 50 year member of the Knights of Columbus. He received his 4th degree in 1967. Gil was very active in the Knights of Columbus by sponsoring many picnics, dinner dances, and floats for the Christmas parade to support the Knights and the Catholic Church. Gil will be sadly missed, but fondly remembered by his wife: Jo Ann Rosipal of the home; seven children: Joseph Rosipal of Waynesville, MO, Gail Bush (Bret) of Kearney, MO, Gilbert Rosipal (Terri) of Austin, TX, Charli Hartley (Mike) of Waynesville, MO, Gina Foster (Tim) of Waynesville, MO, John Rosipal (Debbie) of Waynesville, MO and Jeffrey Rosipal of Austin, TX; eight siblings: Isabelle Marek, Joseph Ladd Rosipal, Paul Rosipal, Herbert Rosipal, Mary Brosch, Carolyn Lazek, Gabby Miller and Trudy Davis; eleven grandchildren: April, Ashley, Chase, Grant, Calha, Jeramy, Aubrey, Alexa, Tel, Cole and Granger; several great grandchildren, nieces, nephews, other relatives and friends. In addition to his parents, Gil was preceded in death by one daughter: Janet Archibald; and three brothers: Richard, Cyril, John, and Sally Fletcher. Mass of Christian Burial was held at 11:00 a.m. Tuesday, November 1, 2016 in the St. Robert Bellarmine Catholic Church of St. Robert, Missouri with Father John Groner officiating. Assisting Father Groner were Marilyn Miller, Charlotte Voudrie and Trudy (Rosipal) Davis and Chuck Kremer did the Scripture readings. Gabby (Rosipal) Miller recalled her wonderful memories of Gilbert. Organist Evelyn Horine accompanied Mike Beattie as he sang “Ave Maria” and led the congregation in responses. Serving as escorts were Chase Foster, Grant Foster, Tel Rosipal, Cole Foster, Jeramy Bush and Granger Rosipal. Serving as honorary escorts were George Beasley and John Crawford. Burial followed in the Resurrection Cemetery of St. Robert, Missouri. The song “I Will Always Love You” by Dolly Parton was played at the conclusion of the graveside service. Services were under the direction of Memorial Chapels and Crematory of Waynesville / St. Robert.

Gilbert Rudolf Rosipal, one of thirteen children born to the union of late Joseph and Agnes Marie (Mokry) Rosipal, was born April 17, 1931 in Granger, Texas. He passed away Thursday, October 27, 2016 in his home (castle) having attained the... View Obituary & Service Information

The family of Gilbert Rudolf Rosipal created this Life Tributes page to make it easy to share your memories.

Gilbert Rudolf Rosipal, one of thirteen children born to the...