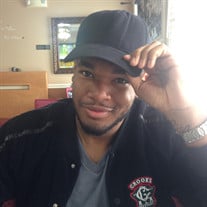 Giovonni Jahvar Robinson, son of Gaitar Eston Robinson and Lisa Faye (Blackwell) Robinson, was born April 22, 1996 in Ft. Polk, Louisiana. He passed away Thursday, January 18, 2018 having attained the age of 21 years. At the age of four, Giovonni (Bear) moved with his family to the Fort Leonard Wood, Missouri area. He attended school in Waynesville and is a graduate of Waynesville High School Class of 2014. While in high school Giovonni was a very bright student, and an exceptional athlete starting all four years during his football career. Bear was a very loving person. There was never a dull moment with him. He was silly and had his own style in his approach to life. Plus he was passionate about what he was doing at the time. Which he often passed with making beats and playing Xbox with his siblings. He lived his life loving hard and cherishing his family bonds! He was a compassionate man and was kindhearted to those around him; especially toward his family, whom he loved deeply. He will be sadly missed, but fondly remembered by all those that knew and loved him. Bear leaves to cherish his memory, his parents, Gaitar Robinson of Waynesville, MO and Lisa Robinson of Dixon, MO; two brothers, Gijon Robinson, Guyton Robinson II, both of Greenwood, IN; two sisters, Gia Robinson of Greenwood, IN and Talayia Robinson of Denver, CO; two nephews, Givon Azai Robinson and Gijon Milique Robinson II; his maternal grandmother, Lorine Blackwell of Denver, CO; his paternal grandfather, Houston Robinson of Denver, CO; as well as a host of other aunts, uncles, cousins, relatives and many friends. Services were held at 12:00 p.m. Saturday, January 27, 2018 in the New Beginnings Revival Center of Waynesville, Missouri with Pastor Susan Marshall officiating. Opening prayer was provided by Elder Sandra Blackwell, Scripture Reading provided by Prophetess Carol Blackwell and Jessica Robinson, and the Praise Dances provided by Joe Johnson, Jr. and the Still Useable Ministries Church. Music was provided by Sister Carla Bender, reading of the obituary was provided by Sister Sheri Gipson, eulogies were provided by Minister Gijon Robinson and Minister Guyton Robinson. Expressions were provided by Coach Rick Vernon, Minister Lisa Robinson, Gaitar Robinson, Ginamali Methany, Gia Robinson and Talayia Robinson. Closing Prayer was provided by Prophetess Carol Blackwell. Serving as escorts were Gijon and Guyton Robinson, Kevonn Shoulders, Eddie and Robert Gipson and Oscar Washington III. Burial followed in the Sunset Memorial Estates Cemetery of Waynesville, Missouri. Services were under the direction of Memorial Chapels and Crematory of Waynesville / St. Robert. Memorial contributions may be made in memory of Giovonni Robinson and may be left at the funeral home.

Giovonni Jahvar Robinson, son of Gaitar Eston Robinson and Lisa Faye (Blackwell) Robinson, was born April 22, 1996 in Ft. Polk, Louisiana. He passed away Thursday, January 18, 2018 having attained the age of 21 years. At the age of four,... View Obituary & Service Information

The family of Giovonni Jahvar Robinson created this Life Tributes page to make it easy to share your memories.