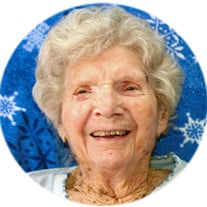 Gladys Wilma (Barry) Miller, daughter of the late William Henry and Bessie (Gray) Barry, was born May 20, 1916 in Johnson City, Kansas where she attended a rural school. On February 3, 1934, Gladys was united in marriage to Glenn Robert Miller in Johnson City, Kansas. They shared over 50 years of marriage together before he preceded her in death in 1984. In 1942, Gladys, Glenn and their little family moved to Ensign, Kansas where she raised her family of four children: Norma Jean, Clell, Glenda and Steve. While in Ensign, she was a faithful and active member of the Ensign United Methodist Church. Gladys and Glenn then moved to Dodge City, Kansas in 1965 where she was a member of the Eastern Star #81, Lioness Club, Women of the Moose #161 (Past Sr. Regent) and active in the United Methodist Women and Quilting Clubs. After the passing of Glenn in 1984, Gladys continued to live in Dodge City until 1994 when she moved to Waynesville to be close to her daughter Glenda. Gladys was a hardworking woman. Whether it was on the farm as a farmer’s wife (which she loved) working in her flower and vegetable gardens, as an Avon Representative, as a cook at Lincoln School and Delmonico Restaurant or as a Walmart greeter (which she did for 14 years until the age of 89), she enjoyed each and every job she had. In her spare time, Gladys enjoyed doing lots of different types of handwork; whether it was crocheting, quilting, plastic canvas, embroidery or applique. She was very gifted in making items and she enjoyed giving them away to her family and friends. She also enjoyed decorating cakes and cooking and she loved to dance. Gladys went home to be with her Lord on Friday, March 29, 2019 in the Richland Care Center of Richland, Missouri having attained the age of 102 years. She will be sadly missed, but fondly remembered by all those that knew and loved her. Gladys leaves to cherish her memory, son: Clell Miller (Kayleen) of Beaver, OK; daughter: Glenda Logan (Jim) of St. Robert, MO; 12 grandchildren: Jack Logan, Ron Logan, Mary Miller, Donna Miller, Joe Miller, Andy Miller, Glenn Williams, Jeremy Miller, Stacy Libertowski, Robert Miller, Scott Miller and Jeff Miller; 17 great grandchildren: Beth Logan, Shawn Logan, Kassandra Logan, Michael Schmale, Brian Logan, Jake Miller, Deny Miller, Anna Miller, Abby Miller, Jason Williams, Travis Williams, Taly Frantz, Phebe Libertowski, Rubianne Libertowski, MacKenzie Miller, Ellen Miller and Emma Miller; 20 great-great grandchildren; other relatives and friends. In addition to her parents and husband, Gladys was preceded in death by one daughter: Norma Jean Williams (Feb 22, 1997); one son: Steve Miller (2011); one granddaughter: Joyce Kershner (May 27, 1997); two brothers: Alvie and Chester Barry; and one sister: Thelma Nachitgall. Graveside services were held at 1:00 p.m. Friday, April 5, 2019 in the Maple Grove Cemetery of Dodge City, Kansas with Minister Rick Main officiating. Serving as escorts were Jack Logan, Ron Logan, Joe Miller, Andy Miller, Glenn Williams, Jeremy Miller, Robert Miller, Scott Miller and Jeff Miller. Services were under the direction of Memorial Chapels and Crematory of Waynesville / St. Robert. Memorial contributions may be made in memory of Gladys Miller to the Waynesville United Methodist Church, Ensign United Methodist Church of Ensign, KS or to the Waynesville / St. Robert Senior Citizens’ Center of Waynesville and may be left at the funeral home.

Gladys Wilma (Barry) Miller, daughter of the late William Henry and Bessie (Gray) Barry, was born May 20, 1916 in Johnson City, Kansas where she attended a rural school. On February 3, 1934, Gladys was united in marriage to Glenn Robert... View Obituary & Service Information

The family of Gladys Wilma Miller created this Life Tributes page to make it easy to share your memories.