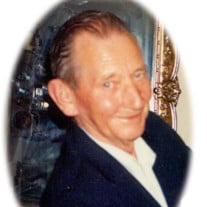 Glen D. Redding was born August 23, 1931 in Oklahoma. As a young boy, Glen grew up in Texas where he attended school and graduated. After graduation, Glen entered the United States Army and served his country faithfully until his retirement after 22 years of service. He had attained the rank of Staff Sergeant and earned several awards and commendations. Glen served during the Korean War and was a member of the Veterans of Foreign Wars. After retiring from the military, Glen was self-employed and did various things; such as managing a trailer park and small engine repair. He loved visiting with people and joking around with them. In his spare time, he loved to watch old TNT movies, especially John Wayne. He was an avid old school country music buff and enjoyed listening to it. He was very smart and enjoyed fixing things, especially mechanical things. Glen passed away Sunday, February 8, 2015 in the General Leonard Wood Army Community Hospital of Fort Leonard Wood, Missouri having attained the age of 83 years, 5 months and 16 days. Glen is survived by three children: Corina Carpenter of San Antonio, TX, Robert Redding of Marietta, GA, and Mario Perdigone (Marie) of Corpus Christi, TX; one stepson: Ralph Perdigone; six grandchildren: Stacey, Jamie, Anthony, Kristy, Samantha and Melissa; one sister: Phyllis Rice of Mesquite, TX; nephew: Robert Charland; thirteen great grandchildren; several nieces, nephews, other relatives and friends. Glen was preceded in death by his parents, two sisters, and one step son, Raymond Perdigone. Services were held at 2:00 p.m. Friday, February 13, 2015 in the Memorial Chapels and Crematory of Waynesville, Missouri. The songs “What A Friend We Have in Jesus”, “Peace in the Valley” and “Dance With My Father” were played. Serving as escorts were the United States Army. Burial with military honors followed in the Missouri Veterans Cemetery of Waynesville, Missouri. Military honors were provided by the United States Army of Fort Leonard Wood, Missouri. Memorial contributions may be made in memory of Glen Redding and may be left at the funeral home.

Glen D. Redding was born August 23, 1931 in Oklahoma. As a young boy, Glen grew up in Texas where he attended school and graduated. After graduation, Glen entered the United States Army and served his country faithfully until his retirement... View Obituary & Service Information

The family of Glen D. Redding created this Life Tributes page to make it easy to share your memories.