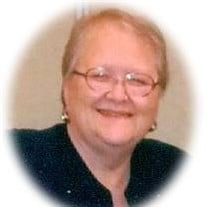 Gloria Jean (Radmaker) Baun, daughter of the late Fred G. and Mary Geraldine (Hippen) Radmaker, was born May 25, 1950 in Buffalo Center, Iowa where she grew up and graduated from high school in 1968. After graduation, Gloria went to Central College in Pella, Iowa and graduated in 1972 with a Bachelor of Science Degree in Mathematics. She continued her education by obtaining her Master’s Degree in Adult Education from Central Missouri State University at Warrensburg. Gloria began her teaching career with the Waynesville R-VI School District at Wood Middle School on Fort Leonard Wood where she taught for 29 years. During her time at Wood Middle School, she met the love of her life, David Louis Baun. They were united in marriage on August 6, 1976 in Waynesville, Missouri and were blessed with one son, Ronald Fred Baun. In her spare time, Gloria enjoyed reading and going shopping with her girlfriends. She was a member of the Waynesville Red Hat Society and the Pulaski County Retired Teachers Association, which she served as President from 2006-2007. Gloria was also a member of the Kappa Kappa IOTA and served as President for two terms (2013-2014 and 2014-2015). Gloria’s life was forever changed in 2002 when David preceded her in death and in 2007 when their only child, Ron preceded her in death as well. Gloria passed away Saturday, February 20, 2016 in the Lebanon South Nursing and Rehab Center of Lebanon, Missouri having attained the age of 65 years. She will be sadly missed, but fondly remembered by all those that knew and loved her. loria leaves to cherish her memory, her six siblings: Barbara Hayes (Tom) of Donnellson, IA, Roger Radmaker (Colleen) of Bancroft, IA, Patricia Langhorst (Bill) of Dodge, NE, Kathleen Lewis (Bob) of Claremont, MN, Peggy Boekelman (Randy) of Lakota, IA and Paul Radmaker (Chris) of Estherville, IA; several nieces and nephews; special friends: Myra Dingman and Ronald West; other relatives and friends. Services were held at 10:30 a.m. Saturday, March 5, 2016 in the Memorial Chapels and Crematory of Waynesville / St. Robert with Roy Gilkey officiating. The songs “Amazing Grace” by Lari White, “The Old Rugged Cross” by Alan Jackson and “I Can Only Imagine” by Wynona were played. Soloist Becky Lercher sang “I’ll Fly Away”. Several friends and family members recalled their wonderful memories of Gloria. Serving as escorts were Brant Boekelman, Randy Boekelman, Tom Hayes, Chris Hayes, Matt Hayes, Paul Radmaker, Melissa Thelen and Trent Grimm. Burial followed in the Dishman Cemetery of Strafford, Missouri. Memorial contributions may be made in memory of Gloria Baun to the Dr. Ronald F. Baun Memorial Scholarship Fund at St. Louis College of Pharmacy and may be left at the funeral home.

Gloria Jean (Radmaker) Baun, daughter of the late Fred G. and Mary Geraldine (Hippen) Radmaker, was born May 25, 1950 in Buffalo Center, Iowa where she grew up and graduated from high school in 1968. After graduation, Gloria went to... View Obituary & Service Information

The family of Gloria Jean Baun created this Life Tributes page to make it easy to share your memories.