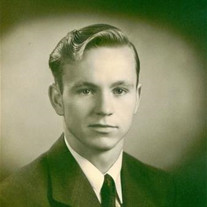 Glynn Houston Snoderly, son of the late Lee DeValcas and Emma Jane (Houston) Snoderly, was born May 20, 1930, in Beloit, Kansas. His family moved to Missouri settling in Richland. Glynn graduated from Richland High School in 1947. On January 9, 1948, Glynn entered the United States Navy and served faithfully until his Honorable discharge on December 21, 1951. Glynn was married to Mary Jo Weeks in 1952 and they were blessed with two children, May Jane and Greg. After their marriage ended Glynn married Helen Vaughn in 1964 and were blessed with a daughter, Kimberle. Then, in 1977 Glynn married Wanda Kubli and they shared fifteen years together with her three children Jeff, John and Jenifer until Wanda’s death in 1992. In his spare time, Glynn enjoyed reading and listening to gospel music. Glynn passed away at 7:50 a.m. Thursday, September 10, 2015 in the Christian Residential Care Center – South of Lebanon, Missouri having attained the age of 85 years. He was preceded in death by his parents; his wife, Wanda Kubli; one grandson, Todd Beeson; one brother Roy Snoderly and one sister, Juanita Pugh. Glynn is survived by his three children: Jane Beeson (Rick) of Lonedell, MO, Greg Snoderly (Barbara) of Richland, MO and Kimberle Garwood (Dave) of Greenville, SC; 5 grandchildren; 11 great grandchildren; 3 step-children: Jeff Kubli (Maureen) of CA, John Kubli (Joni) and Jenifer Kinne all of the state of AZ; 6 step-grandchildren; 3 step-great grandchildren; one sister: Ruby Goforth of Richland, MO; several nieces, nephews, other relatives and friends. Services with Military Honors were held at 2:00 p.m., Friday, October 16, 2015 in the Missouri Veterans Cemetery, Waynesville, Missouri with Pastor Chris Hendrix officiating. Military Honors were provided by the Missouri Honors Team. Services were under the direction of Memorial Chapels of Richland. Online condolences can be sent at www.memorialchapelsandcrematory.com

The family of Glynn Houston Snoderly created this Life Tributes page to make it easy to share your memories.